A PACT WITH THE DEVIL 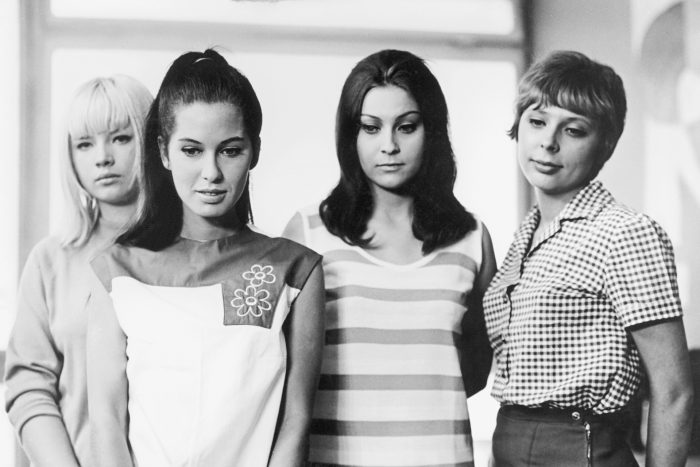 A bunch a high school girls gets denounced of a very serious crime: being tres naughty – as proven by certain photos, their accusers claim. The girls, in fact, are innocent. For the time being – as they shall take revenge on this confederacy of bigots by getting their cherries popped pronto. And thus, the young ladies take on the roles society cut out for them – with glee…

Zmluva s diablom‘s title sequence font might look as if this were some seriously sinister horror movie, while Zdeněk Liška’s Hammond organ sound evokes visions of dank dungeon – but what one gets to see is merely everybody’s boring ČSSR in all its silli- and maliciousness: A world where miniskirts make the enchantress.

While Jozef Zachar consciously evokes Věra Chytilová’s Sedmikrásky (Daisies, 1966) through ao. the presence of iconic actress Ivana Karbanová, he couldn’t guess that his eroto-pop vision of witchcraft trials would only too soon feel like a carefree precursor to Otakar Vávra’s grim ‘n gruesome Kladivo na čarodějnice (Witchhammer, 1969), an allegory on show trials in heritage garb done as a reaction to Normalization’s terrors.

Zachar fled in ’68 to the Federal Republic of Germany where his ability to make young women look hot immediately got him work in the burgeoning sex film industry, resulting in Die tolldreisten Geschichten – nach Honoré de Balzac (1969) and the splendidly titled Alle Kätzchen naschen gern (1969). Meow to that! (OM)