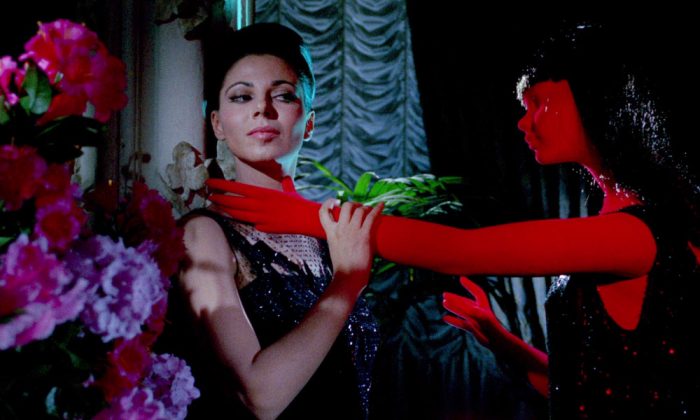 The giallo, Italy’s Pop-Gothic crime cinema with a somewhat harder horror edge than the German variety, is usually discussed as a phenomenon all its own – while Mario Bava never made a secret out of his original inspirations: He did want to create a Wallace all’Italiana, albeit sexier, with serious doses of Sadism, both derived from his earlier experiments in terror with Black Sunday (La maschera del demonio, 1960), The Whip and the Body (La frusta e il corpo, 1963), and especially The Telephone (Il telefono), the opening episode of Black Sabbath (I tre volti della paura, 1963).

His first essay in giallo, The Girl Who Knew Too Much (La ragazza che sapeva troppo, 1963), still feels very close to the German model. But already with his second attempt, Blood and Black Lace (Sei donne per l’assassino), Bava found the mix that from then on would define one of Italian genre cinema’s most successful and influential filone. His key invention: Style trumps plot – putting on a spectacle is more important than going through the investigation motions. Nobody, Bava seems to have thought, goes to the cinema to solve a mystery – people want to be mystified and awed by the splendour of suffering and sex. From The Lady in Black to Blood and Black Lace the rules of the game had turned upside down. (Olaf Möller)