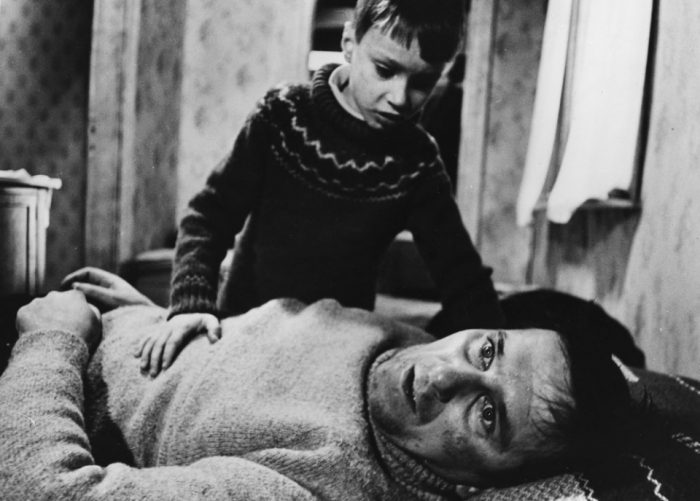 Once upon a time a film club got harsh feedback from the audience: “Why won’t you show Risto Jarva’s Seven Deadly Shots?!” The reasons are plenty, of course, but the multiple errors included in the wish cunningly reveal the significance of Mikko Niskanen’s Eight Deadly Shots among Finnish people. It is almost as important to the Finns as Aleksis Kivi’s work.

In the truth-based story, the family and life circumstances of the tenant farmer and moonshiner protagonist get more and more desperate and finally end in a tragedy. In the leading role we have the director himself who acts soulfully and is in a deeply spiritual, nearly psychotic state. His face resembles the face of Vasily Shukshin, although the stylistic role models – surprisingly so in the Finnish context – are mostly found in Italian neorealism. In the depiction of work and marriage there are echoes from La Terra Trema (1948) and Stromboli (1950), and neorealism in general is present in the film’s laconic everyday realism, in its stripped form. In the politics embedded in the story, neorealistic features are used even more widely.

It is not by accident that Eight Deadly Shots is ranked close to the top when people vote for the best Finnish film of all times. The insane intensity of Niskanen’s acting beats the heaviness of the topic and the duration of the film which is so humanely honest that it was lauded by the real-life murderer Tauno Pasanen. (Lauri Timonen)

Finding Funding for the Restoration of Eight Deadly Shots:
Inspired by Peter von Bagh, Martin Scorsese and Other Friends Pushed the Project Forward

This rare restoration project was born out of Peter “Petteri” von Bagh and Martin Scorsese’s friendship and love of cinema. At Petteri’s suggestion, Scorsese watched Mikko Niskanen’s drama series Eight Deadly Shots (1972) and realized that it was important to preserve this masterpiece to current and future generations.

After technical analysis of the original 16mm film material, the US-based The Film Foundation, its Board of Directors comprising of Chairman Scorsese and a number of prominent Hollywood directors, decided to fund the digital restoration and the production of a new 35mm film print for international distribution. Thus, Niskanen’s series became the first Nordic endeavour of the World Cinema Project.

The restoration was entrusted to the L’Immagine Ritrovata Laboratory, conducted by the Cineteca di Bologna, a close collaborator of The Film Foundation, having previously restored the films of Charlie Chaplin and Buster Keaton. Overseeing the Cineteca’s international collaborations was Cecilia Cenciarelli, another friend of Petteri’s, who was also very excited about Niskanen’s drama. The problem was the runtime of the drama and hence the costliness of the restoration: Eight Deadly Shots is a four-part series produced by the Finnish Broadcasting Company, YLE, with a runtime of no less than 316 minutes.

In the autumn of 2014, the world lost Petteri. A year later, Scorsese personally wrote to YLE’s then CEO, promising that his foundation would pay for two thirds of the restoration if Finnish funding agents could pay for the rest. A new problem emerged: There was no such operator in Finland whose roster could easily accommodate a project of this kind.

In June 2016, Tapio Piirainen’s documentary Peter von Bagh (produced by myself) was screened at the Il Cinema Ritrovato festival in Bologna, Italy. There were a lot of Italian friends of Petteri in attendance; after all, he had been the beloved artistic director of the festival. Among the guests was Cecilia, who after the screening shared her concern over the project stalling due to a lack of funding partners in Finland.

What we did have in Finland were more of Petteri’s friends, four of which (Anne Brunila, Satu Kyösola, Mark Lwoff and myself) decided to raise the money together. In the spring of 2017, we founded an association, Fiction Finland, and sent out several grant applications – to no avail. The recurring issue was that this project didn’t fit in with so many foundations’ agendas stressing new ideas and innovation.

It was not until we marched into the Ministry of Education and Culture that things started to happen. In addition to the Ministry, we received funding from the Tiina & Antti Herlin Foundation, the Jane and Aatos Erkko Foundation and later YLE, who as the rightsholder also entered into an agreement with The Film Foundation.

The work in Bologna started right away, but the pandemic caused delays in the schedule. Now at last, in June 2022, the restored version will have its first new audience in Sodankylä’s World Premiere, after which it will embark on a global tour.

This restoration took place at the initiative of Peter von Bagh. Niskanen’s masterpiece combined with Petteri’s passion has motivated many of those involved during this journey. Hence, our message to new audiences is as follows:

Be like Scorsese – trust Petteri and do not miss this film!

Liselott Forsman,
Fiction Finland / Chair of the Board

“Booze is the root of all evil”

In 2013, the Museum of Modern Art in New York presented a five-hour version of Mikko Niskanen’s Eight Deadly Shots. In its introduction, the museum called the film a “mini-series”, an early forerunner of The Wire, Breaking Bad and The Killing. According to Mike Hale of The New York Times, the comparison was far-fetched since, in his opinion, Eight Deadly Shots is primarily linked to the tradition of European, Scandinavian, and Russian cinema. Shots was originally shown on television in series form, and later in cinemas it was shown as the “Jörn Donner’s cut”, but only as a five-hour film do its connections with that film tradition really come to the fore. So that version is not a conventional director’s cut. “If anything, it could be seen as a critique of the contemporary TV shows and the culture that celebrates them,” Mike Hale further added. And he’s even more right now, because while today’s streaming channel series are plot-driven and genre-bound, Niskanen’s film is something else entirely. It depicts a crime, but it is not a crime film. It is dramatic, but not a drama.

Shots was produced by, or in fact completed in spite of, the YLE Television Theatre and was of a completely different order from the department’s vaunted cabarets, which were based mainly on the idea of “theatre for learning” Bertolt Brecht experimented with in the 1920s and 1930s. So, Brecht doesn’t seem to have any connection to Shots, but when you think of its broad and open epic form, a couple of Brecht’s lesser-known ideas about cinema come to mind. Brecht drew attention to the ‘magnificent way’ in which film can make use of the method known in science and philosophy as ‘inductive’, in which reasoning is not based on some preconceived conclusion but starts from individual observations and events. Admittedly, the beginning of Shots is already a kind of ‘deductive’ conclusion due to topical necessity, but the film nevertheless then follows this Brechtian ideal to the letter. Niskanen is like an ethnologist or anthropologist making field observations, patiently observing the surroundings with his camera and listening to people’s conversations.

Brecht’s other ideas on cinema were related to that. For him, cinema is by its very nature “static”. That sounds quite odd, but that is also how he thinks cinema acquires its characteristic movement. The precondition, however, is that the filmmaker doesn’t rush ahead, but is patient enough to concentrate on individual shots and scenes. In fact, most people think the best scene in Shots is where Pasi, toiling in logging work, repeatedly tries to get his horse, stuck in the snow, to move. It is a perfect example of the narrative that gradually develops from the situations and shots themselves. It’s also remarkable how Pasi’s friend Reiska’s tractor later gets stuck in the snow as well. Many other scenes in the film are repeated, but with variations. Here, Shots remind me of the famous ‘fur hat operas’ of the same years. Alcohol researchers Pasi Falk and Pekka Sulkunen once called binge drinking “the poor man’s opera”. True, for that precisely is what it is in its various modes and stages, but in the same way the distilling of illicit moonshine, human nature, labour, and the equally eternal cycle of nature are also repeated in Shots.

Instead of Brecht, Émile Zola, whose naturalism left its mark on the works of Juhani Aho, Minna Canth and Ilmari Kianto, among others, is often mentioned in the context of Eight Deadly Shots. Naturalism is often spoken of these days only in a mildly pejorative way. For many, it simply means an exacerbated or exaggerated realism. In other words, where surrealism went below the surface, naturalism trudges on in nature and character. At least in the case of Zola, this is a misunderstanding, because for him naturalism was above all a rebellion against romanticism, mysticism, religiosity and “rotten lyricism”. All this is also true of Shots, which seems to have no reference to nature mysticism or religion, nor is it lyrical and sentimental in style. Neither is its humour quite the usual easy-going rural banter, but rather reminiscent of Pentti Haanpää, who, like Niskanen, wandered around his home turf as an outsider ”book-eye”.

So in many ways, Eight Deadly Shots is of a rather peculiar breed. This is also true of the author himself, for while Niskanen is honestly candid in Shots, he is, on the contrary, embarrassingly theatrical in many of his interviews and reminiscences. In a documentary about the director by Peter von Bagh, Kalle Holmberg even speaks of the ”Niskanen paradox”. In this connection, Petteri has referred to György Lukács’s fascinating theory of how many artists have managed, as it were, to portray the world in a masterly way despite themselves. In these times of identity wars, Lukács’s observation is interesting. Honoré de Balzac was an aristocrat and royalist in his worldview, but despite this, or perhaps just because of it, he could write so thoroughly and brilliantly about the bourgeoisie that flourished around him. And so it was with our equally royalist Kari Suomalainen¹, who drew a delicious cross-section of Finnish society.

What else? Well, whatever, but one of the most peculiar features of the Eight Deadly Shots is, like the absence of religion already mentioned, the absence of politics, even though it was in those years that the Finnish Rural Party was rising strongly and won the elections in 1971. Pihtipudas was also centrally involved in the settlement activities led by Veikko Vennamo since, after the war, one-third of the municipality’s area was handed over to the evacuees from Karelia (lost to the Soviet Union).

Niskanen wasn’t interested in politics, for that was the Television Theatre’s job. Despite this, or perhaps because of it, Shots is such a profoundly social film.

¹ Kari Suomalainen was Finland’s most famous political cartoonist (known as Kari). His cartoons appeared daily in the Helsingin Sanomat newspaper from 1951 to 1991.