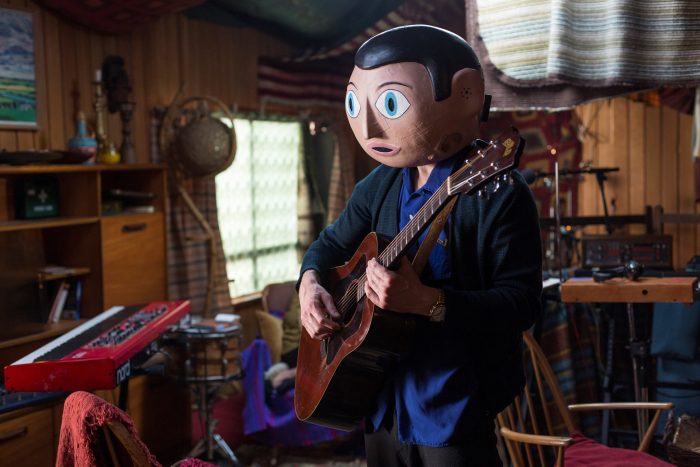 Creativity often blossoms in atypical circumstances. This is in essence the learning curve of aspiring musician Jon (Domhnall Gleeson), who is by sheer chance hired as the keyboard player of electro avant-garde ensemble Soronprfbs. The band is fronted by stream-of-consciousness lyricist Frank, whose giant fake head gives only a faint idea of his unfolding personality. The group travels to the Irish backwoods to work on their album, and thus begins Jon’s deep dive into the exhilarating, comic and also tragic swirls of musical artistry.

Although the character of Frank is inspired by 80s musical cult figure, comedian Chris Sievey’s alter ego Frank Sidebottom, the film is by no means biographical, but rather a fictional journey inspired by a character that anyone (else) would be hard pushed to come up with. Co-screenwriter Jon Ronson briefly toured with the “real” Frank in the late 1980s, but the fictional Jon is a product of the 2010s, yearning for followers in Twitter, which on its part creates a conflict with free-flowing creativity.

Michael Fassbender must have given his agent some grey hairs by choosing a film where he only shows his face for mere minutes, instead having to rely on his deep voice and extremely subtle physical acting. Maggie Gyllenhaal also gets to show off her singing chops. The music of Stephen Rennicks perfectly captures the mood of delightfully spontaneous electro avant-garde antics. (Liina Härkönen)