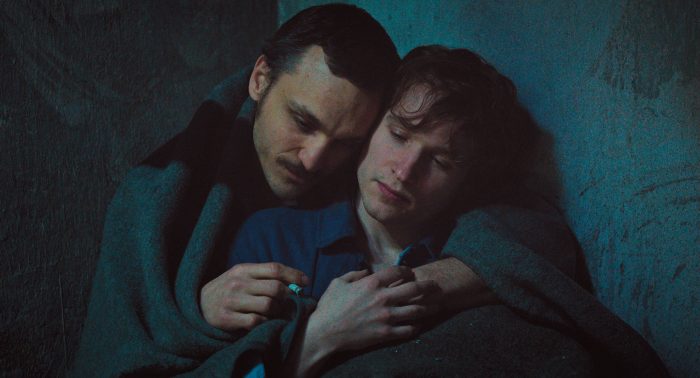 This moving prison drama directed by Sebastian Meise is a story of Hans, who is repeatedly sent to prison because of his homosexuality. Unfolding on three different time levels, the film studies the shifting attitudes of German society towards gay people.

In 1945, Hans is sent to a prison straight from the concentration camp because, despite the horrors of the camp, he still has time left on his sentence. In 1957 and 1968, Hans is promptly sent back to prison for engaging in illegal homosexual acts. Each time, he finds a familiar cell mate, Viktor, waiting for him.

You would think it would be hard to set up a date when constricted by stark prison walls and tough guards, but love will find a way. Despite the grim premise and grey milieu, Meise’s film paints a nuanced portrait avoiding black and white categorizing. Echoing along the dreary hallways, the trumpet of composers Peter Brötzmann and Nils Petter Molvaer sounds like a lonely soul wrenched from its swinging jazz band.

A great emerging star of European cinema, Franz Rogowski (Transit, Happy End) gives an amazingly multileveled and warm performance at the core of the film. Being tossed around by society never makes Hans bitter, nor does he wallow in the injustices of his past. He stays fearless and true to himself in the face of all adversities.

After studying philosophy and painting, Austrian Sebastian Meise (b. 1976) embarked on directing studies at the Vienna Film Academy. Studying under his compatriot, Michael Haneke, this director’s style evokes subtle passion instead of coldness and cynicism. He started playing the guitar after seeing Carlos Saura’s Carmen.

Meise’s debut fiction, Still Life (2011), premiered at the San Sebastian Film Festival and went on to win several awards at film festivals around the world. After this sensitive drama about family relations, Meise directed a bold documentary profile on a young paedophile, Outing (2012). His recent emotive prison drama, Great Freedom, won the Prix du Jury of the Cannes Film Festival’s Un Certain Regard selection and has since then successfully toured around the world. (Otto Kylmälä)