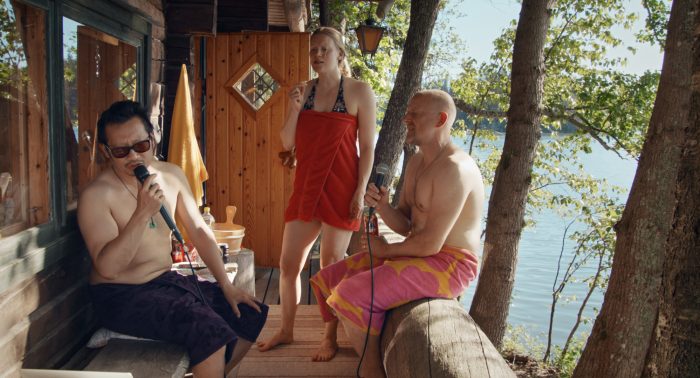 Einari Paakkanen’s second feature documentary Karaoke Paradise has only received praise since premiering at CPH:DOX and Visions du Réel. Filmed by the highly experienced Marita Hällfors, this film has similar elements to the hugely successful Steam of Life (Joonas Berghäll & Mika Hotakainen, 2010): a group of ordinary but unique Finns share their stories with the means of a national treasure. But this time the tool is a microphone, and you patiently wait for your turn. Though we do pay a visit to a karaoke sauna as well.

The audience is guided through karaoke heaven by an old-timer karaoke host Evi, who in bars and nursing homes shares her home-grown but heartfelt singing therapy. We also meet Laura, who lost her child; Elina, who suffers from Parkinson’s disease; shy Toni; and Kari, the outstanding host of the famous karaoke garage in Kalajoki. “There’s a little diva in all of us,” is Evi’s explanation to karaoke’s popularity. To counterbalance these painfully true stories, Paakkanen has included plenty of pure joy of singing into his film; in bars as well as backyards, in every corner of the country. Karaoke Paradise documents Finns’ unconditional love of karaoke, proving the old saying to be true: You don’t have to be a good singer; as long as you feel like singing, you’ll have a good day. (Tytti Rantanen)