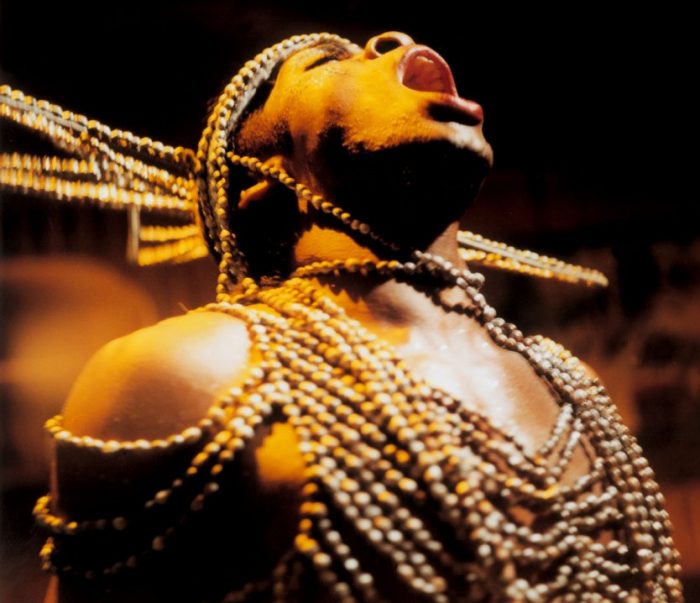 Enlivening the bohemian neighbourhoods of Rio de Janeiro in the 1930s and 40s, João Francisco dos Santos, stage name Madame Satã, was a larger-than-life character: an adventurer with a lust for life, and a mystery hidden behind many roles and layers of identity. The film begins with the listing of Madame Satã’s many crimes, after which we go back to the roots of the legend.

The young João Francisco cracks open the beaded curtain of a night club to see the act of a cabaret artist he admires. His dream is to step out of the shadowy lanes into the spotlight, to be seen. Aïnouz’s camera keeps to a similar voyeuristic method to offer us a peek into this hidden world.

Madame Satã was released in the same year as City of God, focusing the film world’s attention to Brazil and opening a portal going far deeper than the glossy samba dancing image. The capoeira fighter, cabaret artist, criminal and future chef of African descent lives in the grips of physical, psychological and societal abuse due to his race and sexual orientation but is always searching for love.

Throughout history, Afro-Brazilians have paradoxically been both victims and perpetrators of many of society’s problems and injustices. Aïnouz’s way of depicting the past vividly, warts and all, makes his debut an important film about race and gender issues, not just in Brazilian cinema but in global cinema. (Otto Kylmälä)