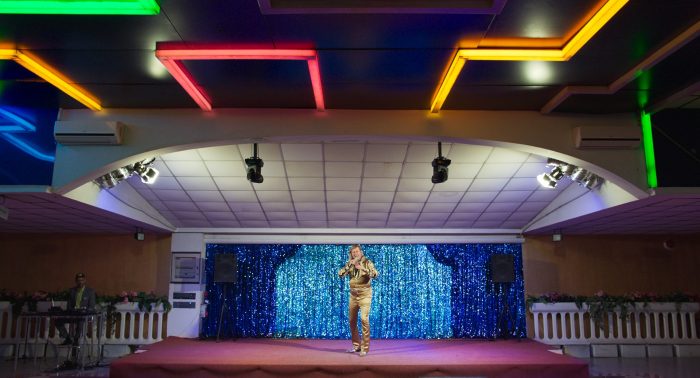 The name of the dark comedy by unique Austrian filmmaker Ulrich Seidl can spring to mind Federico Fellini’s films about his home city – but instead of lush sunny Italian summer moods this film depicts Austrians in a misty and snowy winter: at a holiday resort that is as much out of season as are the tourists in there, beyond their heyday.

The overused saying ‘greater than life’ is a poignant description of the lead that is played with bravado by Seidl’s trusted stable actor Michael Thomas: a singer Richie Bravo (!) runs schlager sessions for pensioners’ bus groups, rents his flat Villa Bravo (!) to tourists and works also as a gigolo (!) for elderly ladies. This film is soaked in kitsch.

As long as Richie doesn’t reveal his true self, it is hard not to have feelings of pity mixed with admiration towards this drunk, narcissistic character who gambles his earnings and yet is somehow devoted and honest in his depiction. While his dressing style is stuck somewhere in the 1980s this tragicomic man doesn’t have the courage to face his current reality. But the moment of truth is approaching when he must face his demented father, wasting away in an Austrian nursing home, and a young woman named Tessa.

Ulrich Seidl (born in Vienna in 1952) doesn’t consider himself as a documentary filmmaker, even though he has made several documentaries, since most of his films are more realistically stylised fiction films moving on the realm of documentary. He has repeatedly depicted different themes around prostitution, tourism, and religion of which the most famous one is the ‘Paradise trilogy’:  Love (2012), Faith (2012) and Hope (2013). It is characteristic for Seidl to work together with his partner Veronika Franz (screenwriting) and Wolfgang Thaler (cinematographer, who is responsible for the well thought compositions and symmetry in Rimini). A parallel film to Rimini is in the works about Richie’s brother living in Romania. (Timo Malmi)