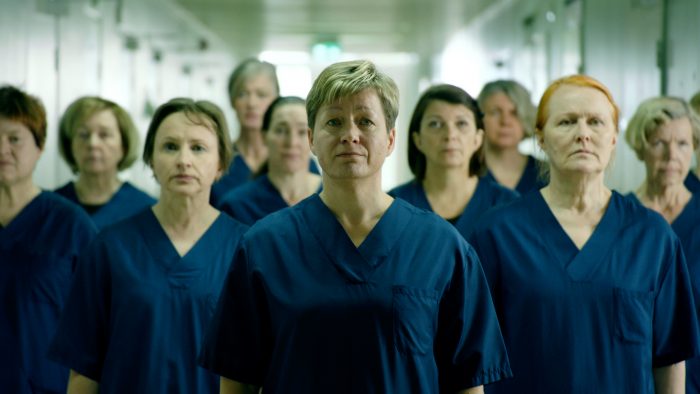 What can’t be talked about, one must make songs about. Susanna Helke’s (The Idle Ones, 2001) new documentary film has a finger on the pulse; the current climate of the elderly and elderly care workers. ”Mistakes in medication. Elderly tied to wheelchairs with seat belts for a whole day. The deceased who lay in the ward for a day…”

The residents of Kaavi are watching from the sidelines when the commune’s nursing home gets privatised: They are worried about the fate of their relatives amid this change. Meanwhile in Helsinki a nursing home is executing a digital leap: pensioners introduced to a Japanese robot. It’s intended to keep company for the elderly. The third storyline is about pregnant Tiina, who has worked alongside people with dementia for a long time. Our fourth storyline introduces Marja Vaarama, a professor emerita.

This satirical yet beautiful musical documentary bites into the crisis of the elderly care sector and everything that is included within it: burden of the nurses, exhaustion, and generalised mental malaise among the staff, which, however, should not be expressed.

Armotonta menoa is a song by “the singing janitor” Sepi Kumpulainen, released in 1991. It became a hit during the early 1990s depression in Finland. Sepi makes an appearance at the end of the film. (Joonas Nykänen)