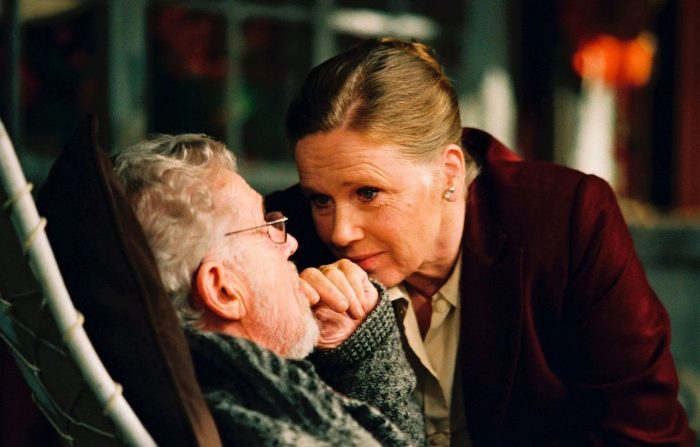 Ingmar Bergman says in the introduction that the TV film Saraband shows four actors and ten monologues on the difficult subject of art, that is, relationships. The film is not a sequel to his film and TV series Scenes from a Marriage (1973), although Liv Ullmann and Erland Josephson play the same characters thirty years after the couple’s divorce.

Johan (Josephson) lives in a lonely cottage, seeing his musician son Henrik and his daughter Karin, who is growing up to be a talented cellist under the tutelage of her father. Karin’s mother Anna has died two years earlier, but her memory lives strong in the minds of all three.

Karin, who has lost her mother, is faced with a terrible dilemma. She is offered brilliant opportunities to develop as a pianist, but fears that her separation from her father will be a disaster for him because of their close relationship. The outsider Marianne (Ullmann) is strongly affected by the emotional outbursts of three generations.

Bergman’s last work is strongly marked by his affection for his dead mother, which he depicts in his photographic short film Karin’s Face (1986). In the film, he has given his own mother’s name to the daughter who has suffered from the death of her mother, and the recurring glimpse of the deceased Anna’s photograph recalls Bergman’s image of his mother in Karin’s Face. (Velipekka Makkonen)