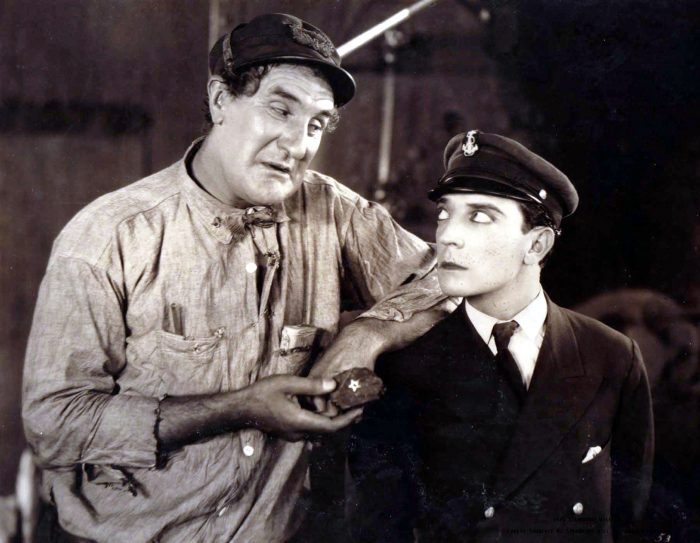 On Friday, the weekend will be launched with Buster Keaton’s silent comedy Steamboat Bill, Jr. (1928), accompanied by the M/S Tempo Orchestra led by Mauri Sumén. Two riverboat companies go head-to-head for the control of a hinterland in Mississippi. One operator is affluent and modern, the other old and classic (the setup drawing comparisons to the arrival of talking pictures in that time). The disadvantaged traditional company is run by a sturdy old hand, whose dandyish son (Keaton) returns from his travels. However, the son isn’t the heroic macho of his father’s dreams, but rather a scrawny poet, who falls in love with the daughter of the rival company’s owner. After a multitude of twists and turns, everything comes to a head with a windstorm (the creation of which took up a third of the budget)…

The official director of Steamboat Bill, Jr., based on a story by Carl Harbaugh, is listed as Charles Reisner, but Keaton’s handiwork is felt everywhere. Although the film has since been hailed as a much-loved classic, it was initially a box office disappointment, released before the beginning of Keaton’s downfall – of his later films, The Cameraman (1928) is one of the few considered seminal. Keaton’s alcoholism was already emerging and many a biographer have speculated on his self-destructive tendencies. The most famous scene of Steamboat Bill, Jr. and perhaps his whole career – already seen in Keaton’s short films where a huge facade of a house topples on the comedian, who is saved only by an open window hatch – was created with a full-sized set piece instead of lighter cardboard set. According to legend, the day before the scene was filmed, Keaton had heard that his studio was going to be shut down, which led him to take this death-defying risk.

The character, growing from a fledgling to an active hero and saviour of the day in the midst of challenging circumstances, comes surprisingly close to Harold Lloyd. Keaton’s face, almost as pale as the silver screen itself, reflects the full gamut of life from the expectations inherent in family dynamics to romantic problems, and from threats of violence to the performance pressures of business life. This persona created by the great comedian is simultaneously everyman and the greatest individual of the story. Even though among esteemed colleagues, Chaplin usually receives the label of the more tragic artist, behind Keaton’s deadpan (but not expressionless!) face dwell thousands of shades of sorrow. Steamboat Bill, Jr. inspires pure joy and will guarantee the biggest laughs of the festival but watching it will also make you understand why Samuel Beckett wanted Buster to visit his world, or how Keaton fan Robert Bresson got the impetus for his model theories. Keaton, lost in his environment, is the paragon of the modern human.