THE BEATLES: GET BACK – THE ROOFTOP CONCERT 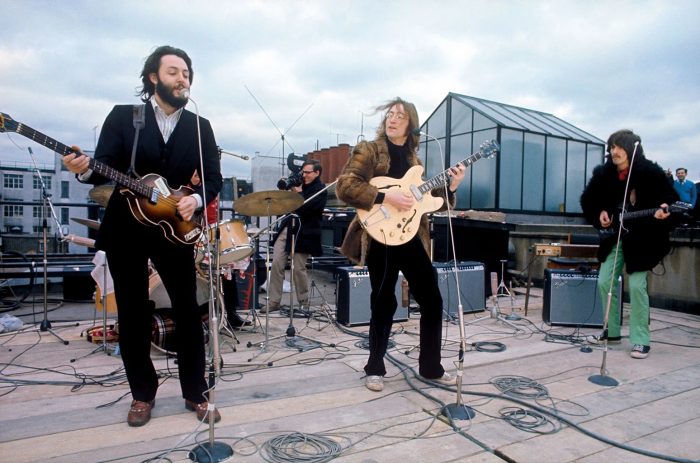 Original name: The Beatles: Get Back – The Rooftop Concert

After having wasted his best years with Tolkien, Peter Jackson returned – at least indirectly – to do a work of genius by directing The Beatles: Get Back (2021), a three-part docuseries of the amazing length of 468 minutes. Michael Lindsay-Hogg is the director of the original 1969 footage that for a great part was not published until now that Jackson “the scavenger“ put the filmed material to new use. In this exceptionally intimate series, we get to see The Beatles in the middle of the creative process, recording music and stressing about their comeback gig. Jackson’s work can at times be compared even to Godard’s One + One (1968) that captured The Rolling Stones’ steaming studio work.

From the docuseries’ material Jackson made a special 60-minute feature of only the unforgettable rooftop concert which remained The Beatles’ last live show and is in no way a poor swansong blurred by the members’ fights and arguments. On the contrary, the band’s playing is as harmonious as ever and their chemistry, personalities and shared glances create a drama of their own aside the melodies. Londoners’ reactions offer us some authentic comedy as the tumult at the roof interrupts teatime.

The most tragicomic figures are two stiff policemen who are faced with the unrewarding task of silencing the devil’s music that disturbs social peace. At MSFF the volume will be turned all the way up as we enjoy the gems of the rooftop concert all together at the karaoke screening! (Lauri Timonen)