THE SONG OF THE TREE 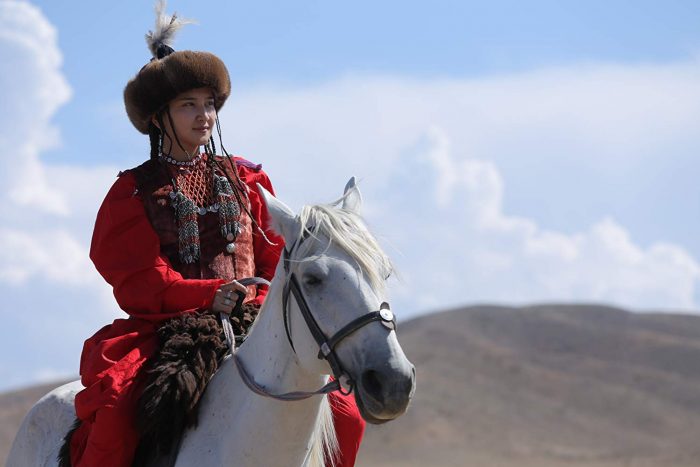 Bollywood, get out of the way: here comes musical spectacle from Central Asia, or more precisely the first Kyrgyzstani representative of the genre! In his first film as a director, Aibek Daiyrbekov combines in a charmingly innocent way the local folklore with visually imposing MGM-style musical tradition – East meets West, indeed.

Despite its subplots, this legend based on a true story set among 19th century nomads is simple. Forbidden love crashes against ancient curses and concepts of honour: expelled by the local chieftain Bazarbai, young Esen is forced to leave his home village. He has fallen in love with Bazarbai’s daughter Begimai whom the treacherous Oguz, the father’s favourite, is also courting. Esen’s return, revenge, a sacred totem tree, and a philosophizing hunter-teacher impart their own tension to the story also relating to the power of the patriarch and the status of the matriarch.

As befits a musical, The Song of the Tree first and foremost offers songs galore, as well as some dance choreography, romance and action, thrilling horse-riding drama, and impressive scenery both on the yurt flatlands as well as of the rugged mountains. The music draws our attention to the local instruments and the plentiful solo numbers in which Saltanat Bakaeva in the role of Begimai excels at. (TM)