The panel discussion focuses on peatlands from multidisciplinary perspectives of natural sciences as well as film and cultural studies. There are four panelists. Aino Korrensalo is a researcher at the University of Eastern Finland and the Natural Resources Institute Finland (Luke) studying peatland ecosystems under changing climate. Korrensalo is involved in an interdisciplinary art-science project on relationships between humans and trees and has also acted as a scientific consultant for artists. Kristiina Lång is an environmental scientist employed by Luke and has studied greenhouse gas fluxes and their mitigation on drained peat soils and soil management. She is a member of the Finnish Climate Change Panel. Johannes Riquet is Professor of English literature at Tampere University and Principal Investigator of the Academy of Finland project Mediated Arctic Geographies. He is presently leading the writing of the book The Mediated Arctic: Poetics and Politics of Contemporary Circumpolar Geographies. Riikka Karppinen is an environmental activist, Green party politician and the chairperson of the municipal council of Sodankylä and the board of the Midnight Sun Film Festival. The panel moderator is Timo Vesala, Professor of Meteorology at the University of Helsinki.

Experience the wonderful open peatland and the Midnight Sun! The Viiankiaapa Mire Reserve is located 21 km north of Sodankylä. The unique Viiankiaapa is part of the Natura 2000 network. There is a short (4.3 km) route to go around.

Registration by Friday 17 June at info@msfilmfestival.fi.

Films related to the theme 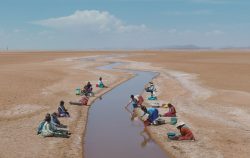 In addition to the panel discussion and the Midnight hike on the Viiankiaapa nature trail, the theme includes two films from our program: Utama, which deals with the drought problem in Latin America, and the Finnish Sauna, directed by AJ Annila and starring our guest Ville Virtanen. Timo Vesala, whose article Ambiguous Geographies between Water and Land – Mediating Arctic Wetlands in Scientific Discourse, Film, and Television features a study on Sauna, presents the film in Sodankylä in the spirit of the theme.

Midnight Sun Film Festival will continue with screenings related to this theme later: in consideration are a summer mini-festival in Karkkila, autumn screenings at Sodankylä’s own Lapinsuu, and/or a programme at the National Audiovisual Institute’s cinema Kino Regina in Helsinki. 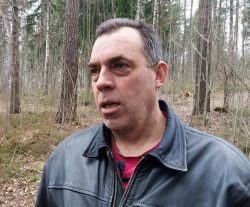 When you need a savant that can recount the connections of the natural phenomena to film, Timo Vesala is just the man you need. He might be the only person in the world who can outline topics such as: “From Vertigo to Blue Velvet: associations of film and climate change” – like he did at the Midnight Sun Film Festival in 2016.

His influential primary work consists of working as a professor in the Helsinki University Institute for Atmospheric Research (INAR), where he is also the long-term co-host of the faculty’s film club. In addition to being a scientist, Vesala is also a long-time film hobbyist and cinephile. His exemplary contributions to the club activities consist of excellent pre-presentations in showings, and of appropriate debriefings in the local Oljenkorsi Pub.

As a MSFF regular he has established himself as a well-liked presenter and conversationalist, who can bring forth substantial insights and unexpected connections. His handiwork can be seen in the excellent article of Filmihullu 6/2020: ”Buñuel ja meteorologia – tuulella käyvät naiset (Buñuel and meteorology – women that run on wind)”. Timo Vesala is just the person to host the festival Friday’s swamp-themed matinee, since he’s one of the contributors to the paper Ambiguous Geographies between Water and Land – Mediating Arctic Wetlands in Scientific Discourse, Film, and Television in the publication The Mediated Arctic: Poetics and Politics of Contemporary Circumpolar Geographies. (Timo Malmi)