15th of June: Saturday Accompanied by Karaoke, Water Polo and a Cult Musical 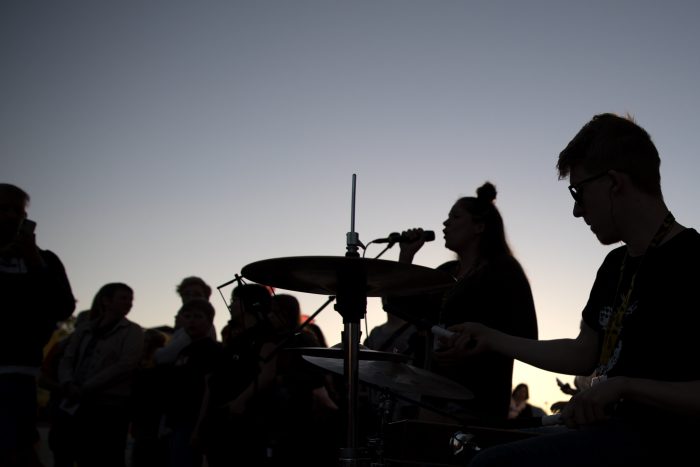 The Film festival Saturday began with Fernando Meirelles‘s morning discussion which was followed by his film Maids (2001). Even though the sunny weather was competing with the films for the festival visitors’ attention, the screenings gathered a lot of viewers.

In the afternoon, Jermek Šinarbajev’s Revenge (1989) was seen in the final part of the Kent Jones’s Master Class. Jones introduced the screening by telling about the Kazakh film industry during the times when the  Soviet Union was collapsing. Due to the unclear political situation, Revenge was one of the films that were stateless for a while. Jones also stated that it is a pity that almost none of the Kazakh New Wave filmmakers are no longer making films.

On Saturday evening, the festival audience enjoyed a silent film concert, which demonstrated silent film era’s visual perfection when Friedrich Ermler’s Fragment of an Empire (1929) was screened at the Big Tent. In this concert, the drummer Martin Pyne played alongside piano virtuoso Stephen Horn. As Pyne drummed the flowing stream of images with his solo, delighted audience applauded enthusiastically.

Pirjo Honkasalo‘s Carte Blanche continued in Lapinsuu with Pier Paolo Pasolin‘s Mamma Roma (1962). In her presentation, Honkasalo stated that the Western capitalism has degenerated the modern soul. Pasolini, famous for causing social shocks, described the state of the bourgeois society of his time as a road leading to destruction. Behind Mamma Roma was a strong political disappointment: the 1950’s policies failed to meet the hopes that ending of the war and the collapse of fascism had aroused.

The super popular karaoke shows continued as the audience of the Big Tent was having a blast at the musical film Badding. Markku Pölönen’s Badding offered a complete karaoke paradise for those who love iconic Finnish music and during the show the audience waltzed, rocked and sung along from the top of their lungs.

In the late Cinema Kitinen, Sonora Broka introduced in her Master Class yet another Baltic cult film, the 70’s Lithuanian musical Devil’s Bride. “This movie could be called a camp version of Jesus Christ Superstar,” Broka said, stirring up the public’s enthusiasm. The cinema was full of laughter when manic musical numbers flickered on the big screen.