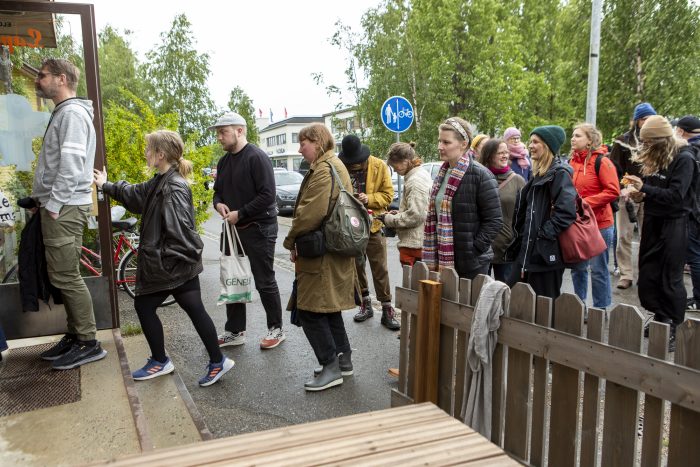 The second day of the festival started in rainy weather but enclosed in a warm atmosphere with a traditional morning discussion. The festival’s program manager Milja Mikkola talked to one of the leading Irish directors Lenny Abrahamson, whose films Room (2015) and Frank (2014) were shown later.

World famous Guled & Nasra (2021) from director Khadar Ayderus Ahmed was also presented and was received with thrill here too. The director was present after the screening and answered questions from the audience.

We also saw two premieres on Thursday. Mikko Niskanen’s masterpiece, the remastered Eight Deadly Shots (1972) was shown for the first time in Lapinsuu cinema with an introduction by the director’s son Jorma Niskanen. The five-hour behemoth gathered a good audience of friends of Finnish film history.

Einari Paakkanen’s second feature documentary film Karaoke Paradise (2022) received its first screening naturally in in the Big Tent, where karaoke screenings usually take place. The filmmakers treated the audience after the film with an outside karaoke event on the shore of Kitinen River, and the audience was thrilled about the possibility to sing their hearts out alongside the stars of the film.

On Thursday many masterclasses continued too. Kaija Saariaho’s masterclass opened in Kitisen Kino with Ingmar Bergman’s final work Saraband (2003) with a full house. Saariaho told that she fell in love with Bergman’s films as a young woman and that they have inspired her music. In Saraband the music intertwined with bergmanesque portrayal of humanity and the audience was captivated.

Timo Vesala’s masterclass presented A.J. Annila’s horror film Sauna (2008) which also filled Cinema Kitinen to the last seat. The film was filmed in location on a swamp, and the lead actor Ville Virtanen stated that the Finnish mental landscape consists of swamps, lakes and forest. “The swamp is a terrifying and mystical place but to me it’s church.”