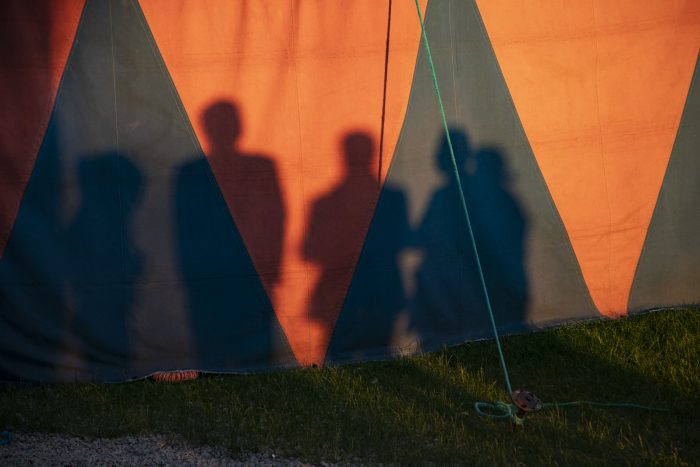 Sunny Saturday begun with this years’ probably most well-known face, Frenchman Mathieu Amalric’s morning discussion. The multitalent told at Kitisenranta school about the coincidences that led him to a career in acting and about his first visit to Finland, among other things. During the day we saw his newest, music-themed films: the documentary Zorn III (2022) and the musical Tralala (2021).

Regular MSFF guests, the band Cleaning Women had a day of celebration. In the afternoon the group received flowers in the screening of the festival’s freshest film The Pupils (2022). The short film, which had its’ Finnish premiere, is directed by Italian Alice Rohrwacher while the Finnish band was responsible for the music. The first meet leeding to the collaboration took place in the Midsummer Film Festival, where else. In the early evening Cleaning Women played the soundtrack to the absurdly funny silent film My Grandmother (1928).

At the School the animation specialist Jennifer Baker’s masterclass presented Hungarian animation films from the 1960’s and 1970’s. The selection moved from cute and optimistic feelings of the 1960’s to the political allegories of the 1970’s. Barker was happy that she had the chance to introduce the viewers to these less known gems in a school environment accompanied with the gentle purr of a 16 millimeter film projector. In his Master Class Olaf Möller was thrilled to present a German work in the form of an Edgar Wallace detective novel adaptation The Curse of the Hidden Vault (1964).

Kaija Saariaho’s third carte blanche film, Stephen Frears’ My Beatiful Laundrette (1985) delved into social differences of Britain. Saariaho, speaking to a fully packed Lapinsuu Cinema, said that the film was an important insight into how significant family background, language and class are in British society.

The small tent’s discussion program continued with a panel discussion by the trade union Pro, which pondered performance-orientation in society and equality in working life. In the worst possible scenario too much competition, trying to fit into old molds, and the lack of social interaction cause human tragedies in working life or even long before it. The structures that maintain them should be dismantled. Director Hanna Bergholm, actress Saara Kotkaniemi, philosopher and Pro’s director of societal relations Maria Mäkynen and Pro’s chairperson Jorma Malinen attended.

One of the most long-lived and dear traditions of Midnight Sun Film Festival is the movie karaoke. This year there was only one karaoke screening but we heard plenty of hit songs. The Beatles’ Get Back – The Rooftop Concert, filmed in 1969 and published this year, offered ecstatic viewers a nocturnal communal experience. The vibes went on at the beautiful Kitinen river shore until the morning.