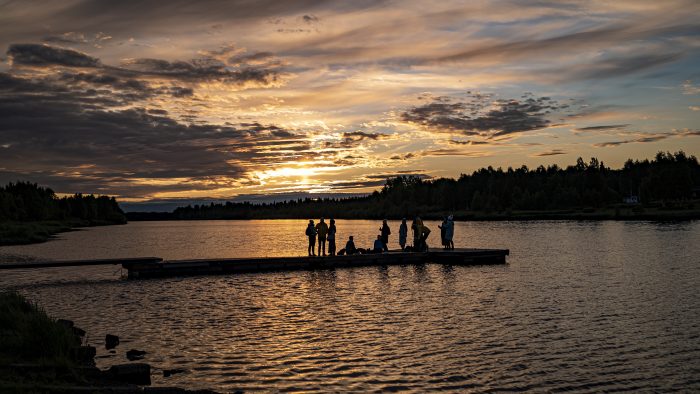 On the final day of the festival in the last Morning Discussion, director, screenwriter, and author Nicholas Meyer discussed with Olaf Möller for example psychoanalysis, Star Trek and the existential threats humans have managed to cause themselves. Meyer also revealed a surprising connection to Finland from his personal history: his mother was born here.

The traditional Film Panel was also a celebration this year as it was the 10th time the panel was held in Sodankylä. The panel host was Ville Virtanen and this year’s panel members were director Johanna Vuoksenmaa, journalist Tuomas Rantanen, actor, singer Olavi Uusivirta and journalist, producer Iida Simes. They watched five short films, out of which Elsa (1981) came as the clear winner with a full score. One of the panel members summarized the film as “exactly how a short film should be”.

Composer Kaija Saariaho’s carte blanche selection’s last screening was held at the Big Tent. Jean-Luc Godard’s French new wave classic Breathless (1960), which was also featured on the festival’s official 2022 image, was one of the young Saariaho’s first glimpses of Paris, a city that later became her home. Saariaho also told the audience that the visit to Sodankylä, a first one for her, was such a great experience that she wishes to become a “permanent member” of the festival.

In the very last slots of the program screened three reruns the festival audience had had a chance to vote for. The closing film at Cinema Lapinsuu was the Finnish hit Girl Picture, which had attracted a lot of attention already prior to the festival. At School the audience got to see Mika Kaurismäki’s gem from the ’90s, L.A. Without a Map, and at Cinema Kitinen the program closed with a treat from the new international  film selection, Audrey Diwan’s impressive Happening. The fair weather caressed the visitors also on Sunday, providing a soft atmosphere for the departure.