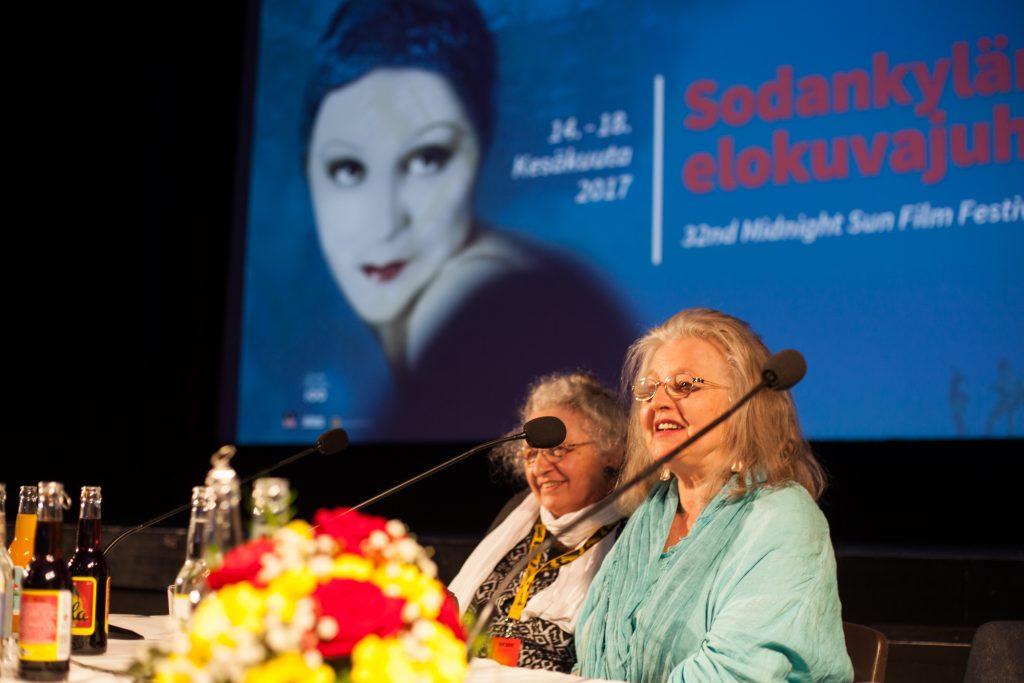 Schygulla was first asked about her childhood lived in the middle of The Second World War. After her father was captured by the Americans and sent to an Italian prison camp, Schygulla and her mother escaped to Munich.  “Inside the train was dark and outside was light. I went up and down and up and down. That is my first image. That helped me to understand life, it goes up and down and up and down. I take it more easily because I know that.” According to Schygulla, her father never recovered from his experiences during the war and was never really able to spend time with his only child. That is why the family had a hard life.

The first films Schygulla saw were Bambi and a ballet movie that was not named during the discussion. The film featured a dancer who finishes her performance despite a nail having been put inside her shoe. ”For me suffering was a part of life and art is pain, so maybe that image about the shoe was forming my impression of art from the beginning.”

Schygulla left for Paris to study languages, but was lured by a friend into an acting club where she met Rainer Werner Fassbinder. It was only later that she found out that Fassbinder had already back then written in his notes that Schygulla was sure to become a star.

Schygulla did end up starring in many of Fassbinder’s films, such as The Marriage of Maria Braun (1979) and Lili Marleen (1989), which are both screened at this year’s festival. Her ending up as an actress is one reason why coincidence is an important topic for Schygulla: “Coincidence is so strange when it happens. It brings things together.” She describes her relationship with Fassbinder as a close one, yet it remained strictly professional. They rarely touched each other, or even exchanged words: “There was no verbal communication between us. I was the preferred one, which I liked, but sometimes he mistreated all of us”. Schygulla suspects that the director’s behaviour stemmed from himself having been treated badly in his youth. Schygulla says that she does not want to defend Fassbinder and his behaviour, but laughs immediately afterwards that maybe she does after all.

From her experiences of working with Jean-Luc Godard Schygulla especially remembers the director’s peculiar working methods: “Godard is a laboratory, he is always experimenting”. Godard’s way of concentrating on the actor’s physical movements was new to Schygulla. “Strangely those very mechanical things gave a very good outcome, because you didn’t try to be too expressional.”

There was no time for further reminiscing, although Schygulla would surely have had a plethora of stories to tell. Large roles are mainly a thing of the past for her. “Directors don’t fantasize about aging women”, she stated and enticed a wave of laughter from the audience. Nowadays Schygulla enjoys filming her own films – she says that she loves taking up new activities: “I felt an exceptional creative ecstasy: me alone with the camera and no one to tell me what to do”. When asked about her desert island film, Schygulla says that she would choose a film that she still dreams of making. When asked the same question again, she laughs and says that she is sticking to her answer.