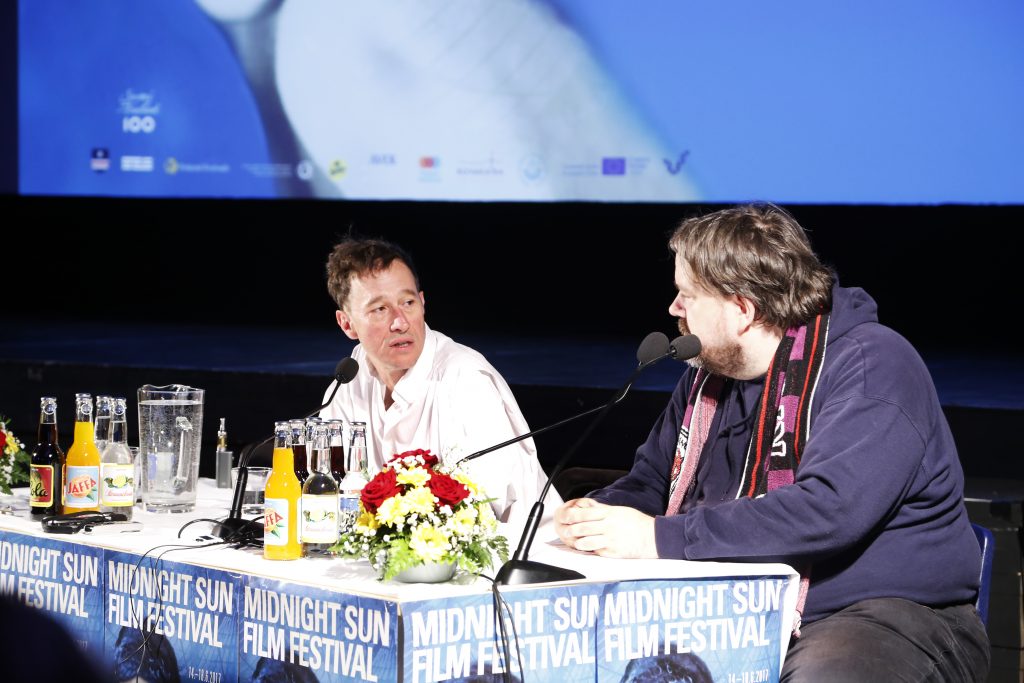 Friday’s morning discussion at the Kitisenranta School featured Bertrand Bonello, one of the directors responsible for expanding the limits of modern French cinema. He was interviewed by Olaf Möller, who asked about the first film Bonello remembers seeing. The director grew up on the countryside near Nice and there were not really any possibilities to see films in a film theatre. However, there are two films that had an impact on him: the Roger Moore starring James Bond film Moonraker (1979) and Alfred Hitchcock’s Psycho (1960). Bonello’s parents did not allow him to actually see Psycho as a kid, but the incident left an impression on him.

However, it was not self-evident that he would become a filmmaker. At the age of sixteen he still had in mind a career as a musician. He had studied piano playing since he was five years old, but eventually grew tired with the music business.

Bonello’s music studies have not gone to waste, as he also composes the music for his films. He says that he starts the composing already at script stage. Bonello compared music to textures and colours. He finds it is easy to convey with music the atmosphere he is after for a film to the other members of the film crew.

Concerning his working methods, Bonello also revealed that he is fascinated with details. For example, when it comes to costumes, it is not only important what the clothes look like, but also the way they feel. In Bonello’s films the characters often touch objects and other things.

As to directing actors, the most important thing is to have proper discussions before going to the filming location. On location, Bonello only demonstrates how the actors should move in front of the camera: ”Basically I try not to talk too much to the actors. Sometimes the more you talk to them, the more they are lost.”

Bonello does not regard digital film warmly and for him digital cinema screenings are similar to watching films on a giant plasma screen television. The director also lamented that it is getting more and more expensive to shoot on film. He finds that film captures textures and details better than the sharp but flat image achieved with digital cameras.

When asked about his desert island film, Bonello grew silent. After a long moment of introspection he picked Francis Ford Coppola’s The Godfather (1972).