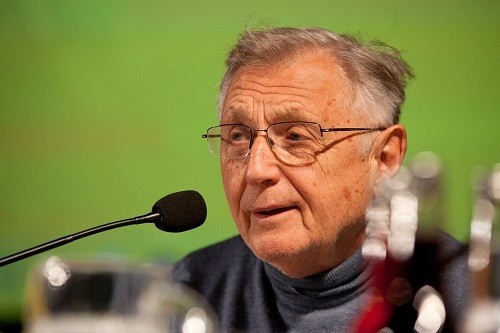 The interviewee of Friday’s traditional morning discussion at the Kitisenranta school was Jiří Menzel, one the most renowned directors of Czech New Wave. Interviewer Timo Malmi’s first question concerned the 1938 born director’s childhood, which was plagued first by the Nazi occupation and later by the rigid rules of the communist state. “I had no idea we were living in an occupied country – there were just certain things that people were not allowed to say”, the director reminisced and said that his mother was afraid that he would blurt out something forbidden in public.

The son of an intellectual father, Menzel did not enjoy school and received low grades to the dismay of his father. The young man got involved with theatre, not as an actor but as a director, because “if you are not good at anything, you can still direct others.” Menzel received additional schooling while directing news films for the army in order to avoid conscription, as well as in Prague’s famous film school where the period’s highly-qualified professionals worked as teachers for additional income.

Menzel was also asked how come the communist Czechoslovakia came to give rise to an entire new wave of cinema, although western films were not readily available in the country during that time. The director explained that the rules regulating filmmaking during the period were not unequivocally a bad thing, since the government controlled film industry was never short of funds. Also, according to him, “unlimited freedom gives you the ability to do anything you want, and that is when you do not have to do anything at all”. In other words, finding ways to bypass the censorship stimulated the directors’ creativity. Menzel does not long for times past, although he does admit that he considers free love as a golden age for himself. “As well as for some ladies”, he joked.

Menzel won the best foreign film Academy Award for Closely Observed Trains (1966), but got in trouble after the 1968 occupation of Czechoslovakia. Larks on a String (1969) criticized the increasingly tight communist regime in a more radical manner and was completely banned, leading to Menzel becoming a nonperson in his own country for a period of several years. However, characterizing himself as a lazy worker, this did not hamper him. Still, he described the state of the country as “Orwellian”.

The director also reminisced on his contemporaries, such as Věra Chytilová, to whom men were very attracted to, according to Menzel. He described Chytilová’s films as “real art”, in contrast to his own “ordinary” films. As for Miloš Forman, whose good looks Menzel was jealous of, the director was asked where the particularly Czech brand of humour so characteristic of both directors’ films stems from. Menzel described his philosophy: “if a person is not capable of laughter, he is not capable of thought”. His answer to the traditional question of a desert island film is exemplary of this philosophy: “I would rather bring a girl with me!”