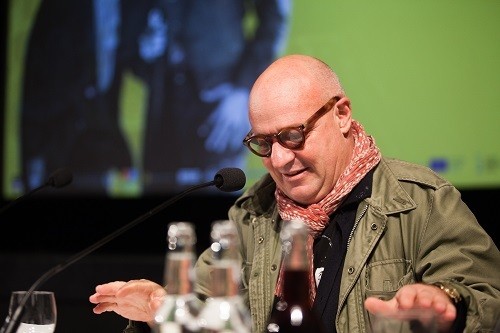 Documantary filmmaker Gianfranco Rosi got interested in cinema at a fairly late stage in his life. He saw Antonioni’s The Lady Without Camelias as a teenager and was greatly inspired by it. In his twenties he switched from studying medicine to cinema studies at New York’s prestigious Tisch School of the Arts.

As a student Rosi’s identity as a filmmaker strenghtened and developed. His first film, Boatman (1993), was also his Master’s thesis for school. It was inspired by Rosi’s travels in India and taught him a lot about the importance of such aspects of cinema as point of view. Rosi also travelled extensively in India without a camera – a method he has since applied in his later films. The filming process itself works as an emotional reconstruction of feelings experienced during the trip.

Shooting on film taught the director about the “weight” of images and about carefully choosing the right moment to switch on the camera. Although his latest film Fire at Sea (2016) is shot digitally, Rosi ascertains that it is imbued with the same philosophy and manner of fimmaking. During the editing process Rosi picks up moments from the filmed material relying on his memory. “Editing is a process of the memory”, he says.

For Rosi, human encounters are essential to filmmaking, because without them there is no story. “It is like falling in love. I love the people I film.” Rosi says that the people he has filmed are still with him in his thoughts. However, some of his human relations have suffered due tofilmmaking – each of his films has caused a separation in his private life. “It is impossible to combine filmmaking and a relationship.”

Rosi knew at a very early stage that he wanted to be a strongly independent filmmaker, director, editor and producer. “Ross McElwee’s film Sherman’s March proved that it was possible to make a film as a one-man project.” Working with an external producer on the film Sacro GRA (2013) caused Rosi great suffering. The idea for the film did not come from Rosi and differing from his usual method of working, the producer demanded to see material from the film while the filming was still in process.

Rosi compares screening intimate raw material to standing naked in the middle of a market place. Rosi’s attitude towards screenplays is illustrative of his working methods: ”If you write a script for a documentary, you start with a lie.”

While making Sacro GRA was painful for Rosi, the production of Fire at Sea was in his own words “virginal”: magical things occurred in front of the camera and everything flowed smoothly. The director had no qualms about the film. “I did not particularly direct the scenes, apart from one.”

Rosi works on all his films as if they were his first and last one. Reality speaks to him differently in each case and as a director he wants to convey this without prejudices. In Rosi’s view, the true challenge for a documentary filmmaker comes from the relation to reality, because realism does not mean the same as observation anymore. ”The reality itself is not interesting at all. A filmmaker has to film the reality to make it stronger, to transform it into something else.”

However, to a desert island Rosi would not take a documentary film – he would pick Buñuel’s Los Olvidados (1950) instead.