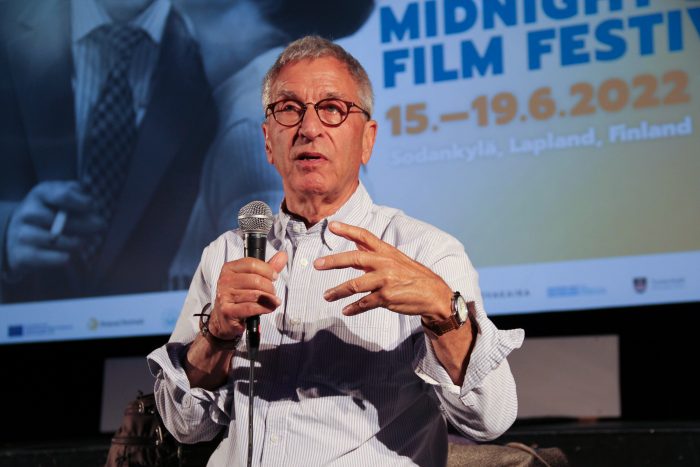 Successful film director, screenwriter and writer Nicholas Meyer talked about his career and its milestones on Sunday morning.

Meyer was born to a family of psychoanalyst father and pianist mother and grew up in New York among an endless supply of culture. To our surprise he mentioned that the first book he read was a Moomin book, a gift from his neighbour. His first film was Peter Brook’s 1953 The Beggar’s Opera, of which he understood nothing according to his own words. Meyer nevertheless sees that it affected his career choice remarkably.

“My psychoanalyst father always said that the things you are afraid of eventually turn into things you love. From this perspective it is completely natural that I became a filmmaker. Childhood events, films and music can transform a person on a very profound level.”

“My parents understood very early that I would become an artist. They familiarised me with high and low brow culture.”

Seeing the adaptation of Jules Verne’s Around the World in 80 days was a life changer, after which Meyer took his first steps as a filmmaker when he started to shoot his own version of it with his father’s assistance.

Meyer, who studied writing, theatre and film in the University of Iowa sees himself mainly as a storyteller.

“I don’t care whether the story is happy or sad, only if it’s good.”

Meyer’s most famous films are probably Star Trek II:Wrath of Khan (1982) and VI:The Voyage Home (1991) and the depiction of a nuclear war The Day After (1983). Meyer didn’t feel any pressure when he began to direct additions to the popular Star Trek franchise. Meyer thinks that the most important thing about directing and making art is listening to one’s own intuition.

“I never cared about what the fans or the audience expect of me or what they are interested in. An artist only has to be honest to oneself.”

The nuclear horror story The Day After has been a huge success and it was the most watched TV-movie in the United States until 2009. It’s a brutally honest and bleak depiction of the horrors of nuclear war and it contains no humour to ease the watching experience.

“The possibility of a nuclear war is the worst thing that humans have done in addition to global warming. I wanted to make a film that has people talking about the thing itself and not for example about acting performances.”

If Meyer had to pick one book for a deserted island, it would be Tolstoy’s War and Peace. Picking one film was more difficult, but in the end he picked Mario Monicelli’s The Organizer from 1963.