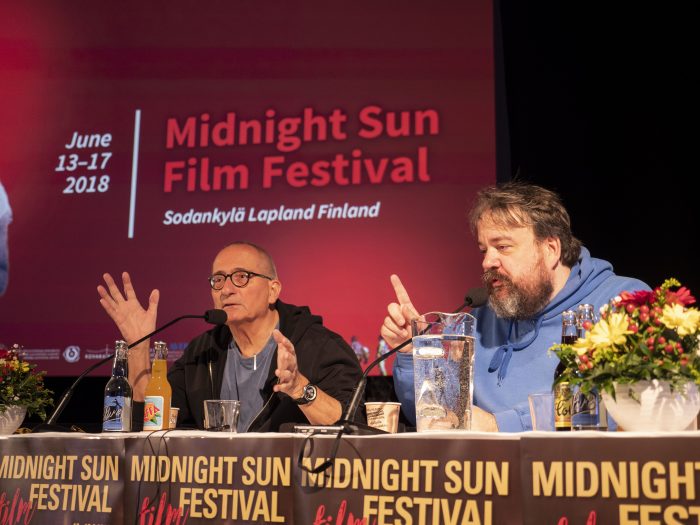 During Friday’s morning discussion Olaf Möller interviewed the German director Dominik Graf. Graf is a relatively unknown director outside German-speaking areas, since he has mostly worked for German television. Only a small part of his work has been made with cinema distribution in mind. Also, he is one of the rare masters of film who were born in the Federal Republic of Germany and worked actively there.

Graf was raised in an artistic family and cinema was often present in his childhood – both of his parents were actors, although his mother later mostly concentrated on writing. The first film Graf remembers seeing was Walt Disney’s Sleeping Beauty. Despite his family background, Graf was in his youth more interested in literature and music and started his studies in the field of literature. According to Graf, he even received an overdose of culture during his childhood.

Despite everything, Graf did end up studying film and television in Munich. At the university he was part of the rebellious generation of the school. One of his close student friends was Wolfgang Büld, with whom Graf has later worked.

Graf says that he got his early practical education while making minor television series early in his career. It was necessary to precisely know the different stages of the project and the effect that the director’s choices would have on the end-product. Artistic maneuvers were of secondary concern, Graf explains. This practicality was a large step for him early in his career.

Graf started to get recognition for his work after making the film Der kostbare Gast in the late seventies. Soon came the made-for-television film Treffer and the television series Der Fahnder. His actual breakthrough came with the film Die Katze.

What is it finally that made Graf so popular? Graf himself proposes that one essential factor was his rapid tempo. German films and series of the eighties were characterized by slow dialogue, but Graf decided against that. He made sure the dialogue’s tempo was more rapid and wanted the actors to speak faster. Throughout his career, Graf has paid special attention to dialogue – everything in a films centers on it.