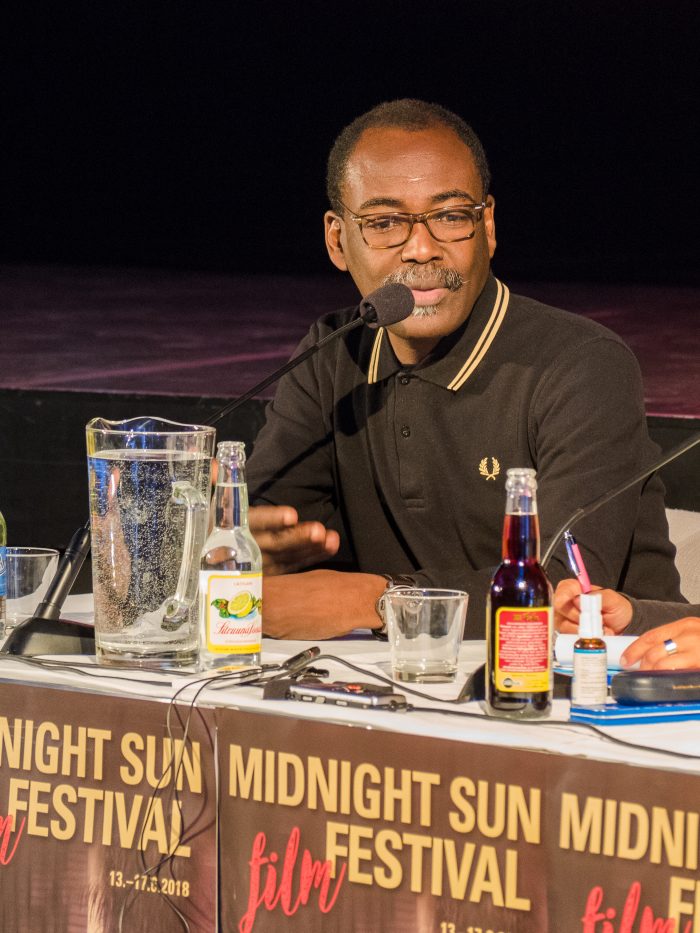 Thursday’s morning discussion was with Chadian director Mahamat-Saleh Haroun who nowadays works in France. The director was first introduced to cinema as a nine-year-old, when his uncle took him to see a Bollywood film. Mahamat-Saleh says that the only thing he remembers from the film was the very beautiful face of an Indian woman.

– For a minute I thought that she was looking directly at me. That is how my long love affair with cinema got started, the director told.

Mahamat-Saleh grew up in a small village and praises his close relatives. He thinks that the idea of sharing is also central to cinema. After his first eye-opening experience of cinema Mahamat-Saleh started sneaking into movies night after night despite the frightening, pitch dark journey back home. Only a few friends were able to accompany him on these trips, which is why Mahamat-Saleh and the other lucky ones made the effort to re-enact the films they had seen to their friends via shadow plays, for example.

The civil war was present in Mahamat-Saleh’s childhood in the form of random conflicts. However, he says that the violence finally escalated to an unimaginable level of savagery. Mahamat-Saleh himself was also wounded by a stray bullet, after which the family ran away to Cameroon. Their former live was shattered completely. They did not even have identity documents with them. Mahamat-Saleh only had a piece of paper with the address of a Parisian film school in his pocket. It gave him hope for the future.

The road to Paris took him through Libya and China. At his destination Mahamat-Saleh immediately found his way to the film school at Rue de Delta – to the address that he had carried in his pocket for so many years. At the end Mahamat-Saleh started studying in another film school while financing his studies by working in a hospital. In addition to his film studies, Mahamat-Saleh has studied journalism in Bourdeaux and helped establish film education in Chad.

The civil war he experienced first-hand is present in many of Mahamat-Saleh’s films. Dry Season depicts the cycle of vengeance in a village ravaged by heat and dryness. In the film Screaming Man the director switched to a more watery and urban environment. This year’s Midnight Sun Film Festival opening film, A Season in France, depicts a refugee’s experiences once he has reached his destination country. The director admits that the protagonist’s story is largely identical to his own.

Mahamat-Saleh feels that along with Roberto Rossellini, Jim Jarmusch and Aki Kaurismäki, he is part of the humanist branch of cinema descending from Chaplin. The directors are connected via their pondering of humanity and search for truth and meaning. As his desert island film Mahamat-Saleh picked Roberto Rossellini’s Rome, Open City.