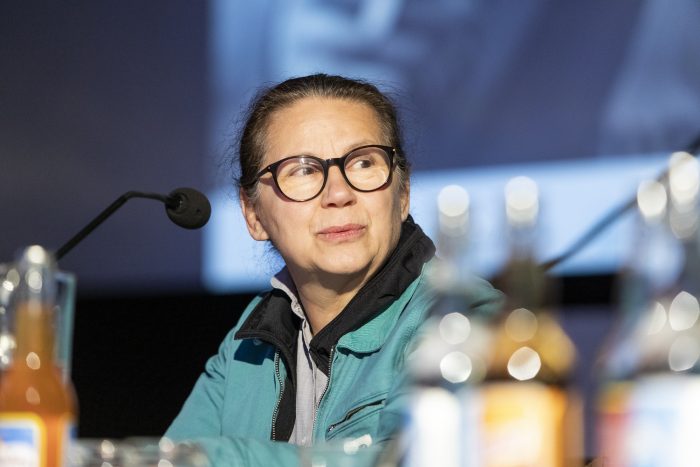 In Friday’s first morning discussion Hungarian director Ildikó Enyedi told about how she became a film director behind the iron curtain in her birth town Budapest.

She told that her first cinematic memory was 101 Dalmatians. She described herself as being mostly a book worm as a child. She was also a good student, but most of the time she read behind her teachers’ backs. “I was a quiet anarchist”, she smiled.

Enyedi was the only child of her scientist parents. Her parents’ passion toward their work became the guiding light of her filmmaking. Young Ildikó listened to her parents’ discussions about big questions, such as how to make the world a better place.

Born in 1955, Enyedi described her generation as being forced to make a big decision: whether to stay in Budapest or leave. Both choices held big sacrifices. She decided to stay.

Budapest was on the liberal end of the spectrum compared to many other countries of the Eastern Bloc, but discipline was strict. “The prison was nicely decorated, but it was nevertheless a prison”, she said.

As a young woman she lived in the first commune of Hungary and there she joined an artist group, where mathematicians, filmmakers and philosophers worked together. Their working was strictly constrained. It was hard to find work spaces and they were forced to move constantly. It was nevertheless unlikely to have to go to prison. “We made fun of the officials. It felt good.”

“Nobody was bitter about missed opportunities. Being on the fringes meant having less money, less prestige and smaller perspectives. But we all felt that we were the ‘real ones.” Budapest’s political subculture, which Enyedi was in contact with, ran its own university in varying conditions, talked about politics and about possibilities to change the system.

Enyedi nevertheless felt that diving headlong to the political world would mean limiting herself. She felt that it would have tied her to the ones in power, for they would have described what she hated and opposed. Enyedi wanted to fight for inner freedom instead. “I just followed my true interests. By pure chance it collided with the outer world and sometimes it was received with big enthusiasm.”

Enyedi’s films often explore our situation with animals and plants. She says that the motive is most of all theoretical. “I envy you that have a deep connection with nature. I grew up in Budapest, and I didn’t have any pets. For me nature isn’t natural.” Instead she approaches animals in her films like humans, with their own feelings and wisdom that we don’t always recognise.