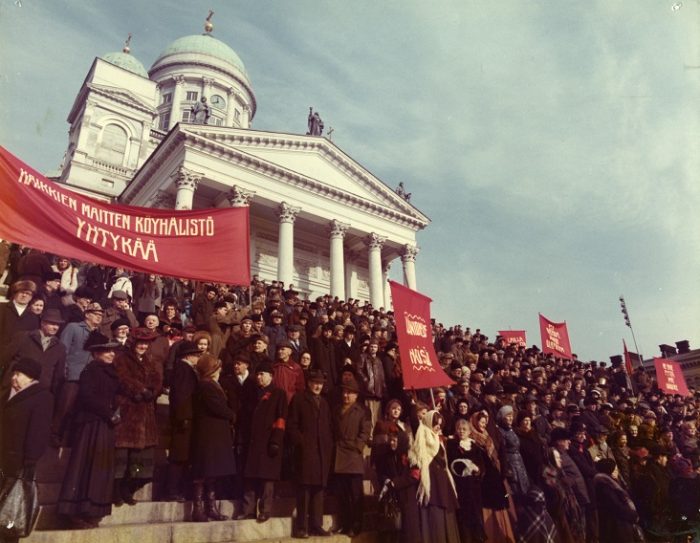 Hedonistic centenaries end on a high note at Berlin’s historic Zeughaus Kino from the 5th to 13th December.

Focus of the series is in the stormy years of 1917 and 1918.  Jean Sibelius’ Finlandia gave life to V.A. Koskenniemi‘s poem Your Day Will Come, the series carrying the title of Finland’s national anthem brings the early steps of independence into life with four fiction films and one documentary. Themes vary from epic national films to controversial works and furiously revisionistic stories.

The opening film is Lauri Törhönen‘s Border 1918 (2007). Independence Day’s pick on the 6th December is a very rare treat directed by Edvin Laine and the Soviet director Viktor Tregubovic, Trust (1976). Self explanatory pick is Edvin Laine‘s great classic, Under the North Star (1968). Documentary Remembrance is a triumph of one of the most influential post-war caracters of Finnish spirit, Peter von Bagh. The last film of the series is directed by Jotaarkka Pennanen and produced by Jörn Donner. The Mommila Murders (1973) tells the story of the murder of the richest man in Finland at the time of independence, Alfred Kordelin.

Finland declared independece on the 6th December 1917 as an aftermath of Russian’s great sosialistic revolution in October 1917. Finland became a democracy in 1919 and the two years before that have had a strong, traumatic impact of Finnish people. From January 1918 til May 1918 there was a civil war between progressive and conservative groups aka the reds and the whites. Germany came and solved the fight to favour of the whites. It took about four decades before the crimes of the whites and the suffering of the reds could be publicly discussed. And still, 100 years after the conflict, people might cross the street if they were to meet with someone who’s great grandfather was known to be fighting on the other side… Finland’s independence is also history of implacability!

Your Day Will Come at the Zeughaus Kino in Berlin from the 5th to 13th December.