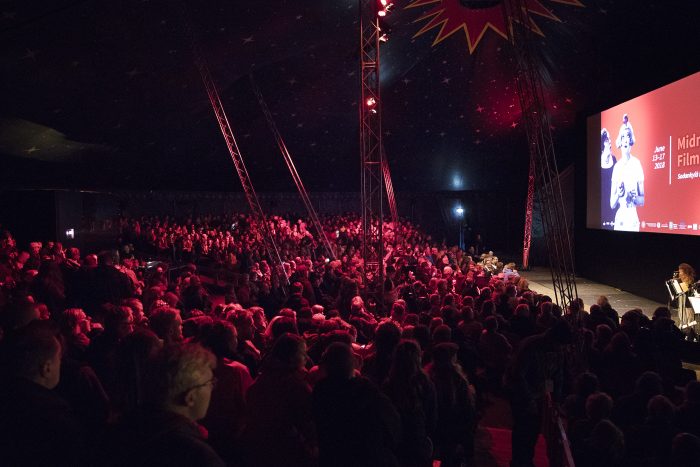 The first morning discussion of this year’s Midnight Sun Film Festival took place on the second festival day. Director Mahamat-Saleh Haroun attracted a full audience to the School and made an impression with his warm personality and sharp social insights. After the discussion there was a screening of Haroun’s Bye Bye Africa.

An episode of Dominik Graf’s Der Fahnder previously unseen in Finland was screened at the Small Tent on Thursday. After the screening Graf discussed the current state of public television and the limits of the television format with his Finnish colleagues Tapio Piirainen and Neil Hardwick. The conversation gathered speed when Graf and Piirainen revealed that they hide political commentary into their work under the eyes of producers and financiers. The relaxed and outspoken conversation was filled with critical comments and bold humour.

Olaf Möller’s selection of football films continued on Thursday with the Swedish classic Fimpen (1974), in which the six-year-old protagonist, Little Johan, does not even know how to tie his shoes properly but still makes his way to the Swedish national team. In addition to Johan, the feel-good film features actual Swedish football stars of the time. ”Who of you has never thought ’oh my god, it would be so great if some catastrophy happens, and my team remembers me, and I will save them’? This is essentially what our film is about”, said Möller.

Jennifer Barker was invited to Sodankylä for the second time this year. Her Master Class Delicious Catastrophes consisted of eight short animation films from the sixties to eighties. The films illustrated the paradoxical nature of life via the ambiguity of animation – there is always a comic side even to disasters, failures and accidents.

The line to the first accompanied silent film of the festival was as long as every year. Composer and tenor saxophonist Esa Pietilä brought a whole new vigour to Jean Vigo’s  À Propos de Nice. Pietilä’s skillful playing and inspired “sound effects” delighted and amused the audience. The screening also included Vigo’s revolutionary classic Zéro de conduite. Between the two films, Vigo expert Nathalie Bourgeois told the audience about Vigo’s eventful life and the four films he made before his early death.

The revolutionary atmosphere continued at the Big Tent with the karaoke screening of Jouko Aaltonen’s documentary film Revolution, which took the audience back to the seventies and the world of protest songs. Familiar Sodankylä guest Olavi Uusivirta and the popular Finnish actress Kristiina Halkola were the screening’s pre-singers and received uproarious applause from the enthralled audience.

Finnish short films were a hit among the festival goers, with the late night short film screening at the Small Tent selling out. The selection included films such as Terhi Kokkonen’s Bellboy and Sasu Kerman’s award winning documentary short The Iron Man of The North.