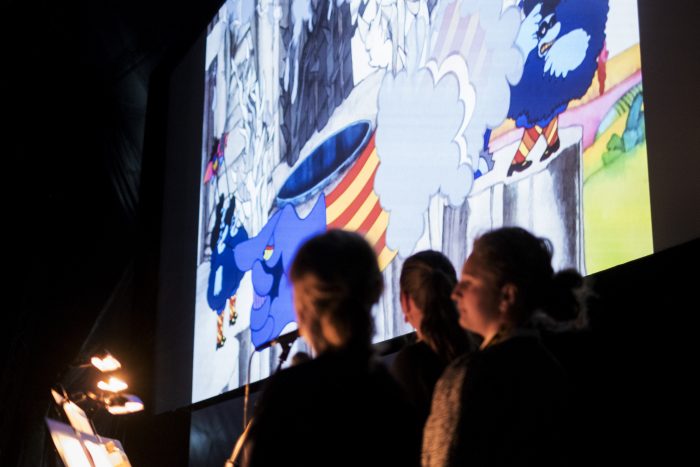 Olaf Möller’s series of football films continued at the Small Tent with a screening of Substitute, the story of French player Vikash Dorasoo. Instead of being a glossy hero story, the film documents the brutal reality behind the scenes of the sport. Dhorasoo was left on the benches in the 2004 World Cup, and bitterly spills out his disappointment in front of a handheld camera.

The football theme continued with the festival’s traditional football match. The teams Midnightsun and Terrestrials met on the Sodankylä sports field. The teams consisted of the festival staff and guests.

This years series of accompanied silent films at the Big Tent culminated with the Hitchcock classic The Ring. The audience got to enjoy the complex and precisely timed sound scape created by Kossi, Becker and Albrechtsen. The tent bursted with spontaneous laughter and the applause at the end was deafeningly loud.

Author Kjell Westö’s Carte Blanche choice for Saturday was the lesser known Coen brothers film Inside Llewyn Davis. Set in Westö’s birth-year, the film’s protagonist is a down-on-his-luck folk singer who is easily relatable for any artist, including Westö himself.

The communal experience of singing at Saturday’s karaoke screening of The Yellow Submarine (1968) left no festival goer lonely, with the full Big Tent singing along with the colourful Beatles adventure. The song All you need is love caused the most enthusiastic members of the audience to get off their seats to the front of the stage and join Olavi Uusivirta and the other pre-singers.