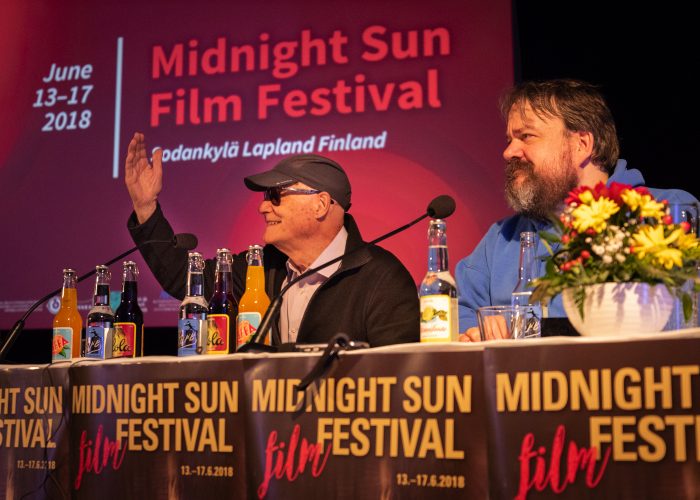 Veteran director Barbet Schroeder was the guest at Saturday’s morning discussion at the Kitisenranta school. Schroeder’s films deal with extreme subjects and complex people and he told interviewer Olaf Möller that his relationship with cinema is connected to two traumatic experiences. Disney classic Bambi was the first film Schroeder saw and it caused him such a strong reaction that the young Schroeder had to be dragged screaming out of the screening.

However, Schroeder’s most important film experience in terms of the content of his own films the Iran born director received after moving to Paris. Schroeder’s mother is of German background and she decided to educate her son on the atrocities committed by Nazi Germany after some locals called a friend of the family a “Jew”. The Alain Resnais’s classic Night and Fog (1956) had such a strong impact that it basically gave the then 14 year old Schroeder a new direction for his life. While still young, he managed to join the editorial team of Cahiers du Cinema and spent a lot of time with other cinephiles.

Soon Schroeder took another step forward by becoming longtime friend Éric Rohmer’s producer. He founded the Les Films du Losange production company so that his friends would be able to make small budget films as independently as possible.

Gaining more confidence by working with Rohmer, Schroeder mentioned that becoming a producer at such a young age taught him how to handle setbacks and difficult situations. Schroeder told anecdotes about risk taking producers as well as challenging productions in unfamiliar environments and cultures.

It was from Rohmer that Schroeder learned that there is a seed of documentarism in every film. Rohmer respected the authenticity of a scene even when making fictional films. Möller lead Schroeder to admit that this is characteristic of Schroeder’s films also. La vallée (1972), for example, is a metafictional commentary on filmmaking that follows a group of youngsters travelling to an indigenous people’s area.

Schroeder has never shied away from switching genres and styles. He said that he is looking for adventure via his films – that makes him feel alive. Somewhat surprisingly, he added that he was also happy making Hollywood films. Despite receiving criticism, he told that he has always been attracted to films aimed outside the arthouse audience. Still, Schroeder’s Hollywood films are genre films mainly because it is easier to get financing for such films rather than convincing producers of one’s own ideas.

Dealing with out-of-the-ordinary themes and phenomena in his films, Schroeder said that he chooses his themes simply based on whether they interest him or not. He familiarizes himself with the subjects of his films extremely well before the filming begins. It was Schroeder’s research on how Baruch de Spinoza and Buddha conceived hate and self-control that led him to make his latest documentary The Venerable W. Schroeder’s ponderings on ways of dealing with personal anger led him to information about Burmese monks who provoke fascism and genocide in their country.

Schroeder thought about what his desert island film would be for a long time, but if he had to pick his favourite film of all time, it would be F.W. Murnau’s Sunrise (1927).