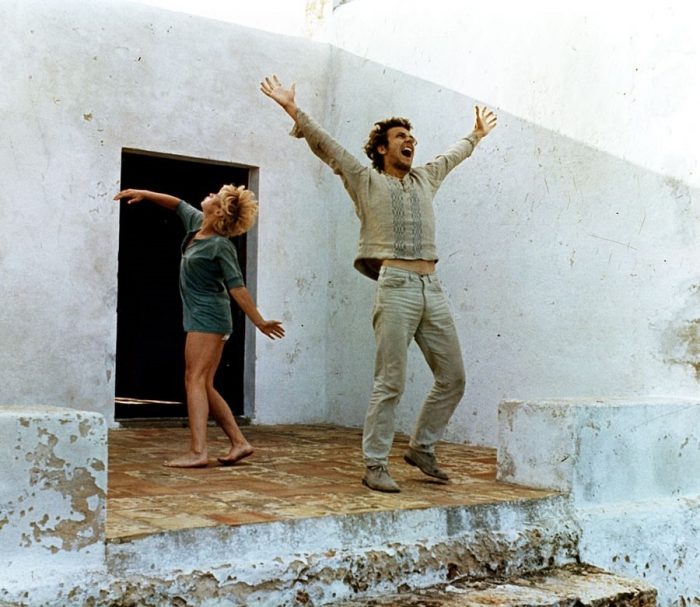 A group of legendary filmmakers are going to make their way to the Midnight Sun Film Festival in Finnish Lapland again this June. Olivier Assayas returns to the festival with The Ingmar Bergman Masterclass and his own breakthrough film Cold Water. The Franco-Swiss filmmaker Barbet Schroeder attends the festival with his wife, the highly appraised actress Bulle Ogier. Mahamat-Saleh Haroun is the celebrated African director from Chad, and José Luis Guerín the Spanish master of poetic and intellectual cinema. Dominik Graf is one of the top auteurs of modern Germany. A large group of Finnish filmmakers, musicians, experts, and the sound wizards Heikki Kossi, Nicolas Becker and Peter Albrechtsen also come to spend time with us under the midnight sun. The five-day festivities offer several silent film concerts, fascinating premieres, and eye (and ear!) opening lectures.

Barbet Schroeder (b. 1941) was born in Teheran but studied filmmaking in Paris. He started making films together with Jean-Luc Godard and Jacques Rivette. His first feature film is the hippie story More! – one of the first films openly showing the use of hard drugs. In the 80’s Schroeder moved to Hollywood to bigger budgets and huge stars. His best-known films include the Charles Bukowski story Barfly (1987) starring Mickey Rourke. Single White Female (1992) is an iconic erotic thriller about the fears and traumas of the human psyche. Reversal of Fortune (1990) gained Schroeder an Oscar nomination, and his leading actor Jeremy Irons ended up winning the Oscar for Best Male Lead. Idi Amin Dada began Schroeder’s “Trilogy Of Evil” in 1974. The trilogy ended with the chilling documentary Le vénérable W. (2017).

Schroeder comes to Sodankylä together with his wife, the legendary French actress Bulle Ogier (b. 1939). Ogier commenced her career by acting in Luis Buñuel’s absurd comedy The Discreet Charm of the Bourgeoisie (1971), Alain Tanner’s comedic triangle drama Salamander (1971), and in Color of Lies (1999) by the new wave pioneer Claude Chabrol. Ogier has also worked with her husband in Maitresse (1976), a striking film about sadomasochism, together with Gérard Depardieu.

The French master Olivier Assayas (b. 1955) visited the Midnight Sun Film Festival four years ago and now returns between his upcoming projects Non Fiction and Wasp Network. Last year the festival screened his latest film attending the Cannes Film Festival, Personal Shopper, but this year he returns to Finnish Lapland as an expert. Assayas has written a book about Ingmar Bergman and his masterclass is focusing on Bergman’s film Winter Light (1963). Assayas’s own breakthrough film Cold Water (1994) is rarely screened due to copyrights of its soundtrack (Leonard Cohen, Janis Joplin, CCR and many others).

Africa’s top director Mahamat-Saleh Haroun (b. 1961) has brought home several awards during the past fifteen years from both the Cannes Film Festival and the Venice Film Festival. The pioneer and top director of African cinema is a sovereign storyteller to whom Aki Kaurismäki paid homage in his 2011 film Le Havre. Bye Bye Africa (1999) is the autobiographical documentary with which Haroun returned to refresh the smashed film industry of Chad, his war-torn native country. Dry Season (2006), A Screaming Man (2010) and A Season in France (2017) are charming but serious stories about people in a destroyed nation. In Haroun’s films, Chadian people get to see their own reality from the point of view of one of their own storytellers. As the only film director in Chad, Haroun has also established a film school there.

Dominik Graf (b. 1952) arrives in Sodankylä with his films made for the silver screen, but the selection also includes some of his highly noted television works. One of Graf’s best-known films is Beloved Sisters (2014), a period drama and a poetic portrait of the writer Friedrich Schiller. Die Katze (1988) is a crime thriller about a brilliantly planned bank robbery and Nachtwache (1993) a great example of his TV work. Der Felsen (2002) is melodrama located in the beautiful island of Corsica, and The Red Shadow (2017) a political thriller that caused public uproar in Germany.

José Luis Guerín (b. 1960) is one of the most interesting filmmakers of modern Spain. He’s a cinefile whose meditative and intellectual films balance between fiction and documentary. In his work Guerín analyses other films and film history. He is inspired by such great names as the Lumière brothers, Howard Hawks, Yasujirō Ozu, and John Ford, to whose beloved classic The Quiet Man (1952) Guerín has paid tribute in his poetic documentary Innisfree (1990). Guerín also brings to Sodankylä his experimental film Train of Shadows (1997), the romantic drama In the City of Sylvia (2007), and his latest film The Academy of Muses (2015).

Katharina Wyss (b. 1979) attracted attention at the Venice Film Festival last autumn with her first feature film Sarah Plays a Werewolf (2017). The film is a portrait of a 17-year-old girl who finds theatre a tool for channelling her bottled-up emotions. Sarah’s ideas are dark and radical, but for the first time in her life she gets them heard.

Other guests arriving under the midnight sun include the young European filmmakers Anja Kofmel (b. 1982) and Thomas Stuber (b. 1981). Kofmel has created a beautifully crafted debut feature combining documentary to animated elements, Chris the Swiss. Stuber’s film In the Aisles competed in the Berlinale and stars Franz Rogowski (Victoria) and Sandra Hüller (Toni Erdmann).

The much anticipated selection of silent film concerts end on a high note thanks to the get-together of award-winning sound artists: Finland’s national treasure, the Foley artist Heikki Kossi, the two-time Golden Reel Award winner Nicolas Becker and their Danish collegue, Sound Master Peter Albrechtsen will create a totally new soundscape for Alfred Hitchcock’s rare gem The Ring (1927) and talk about their work with the greatest filmmakers of our time.

The silent film concerts are an essential part of the Midnight Sun Film Festival experience. This year they include King Vidor’s breathtaking comedy The Patsy (1928), which will be served together with Maud Nelissen’s music performed by the band The Sprockets. The young genius of Jean Vigo was gone too soon, but his films keep on living. The tenor saxophonist and composer Esa Pietilä blows new life into Vigo’s short comedic documentary About Nice (1930).

Carte Blanche is presented by the award-winning Finnish novelist Kjell Westö (b. 1961). His selection of films include the greatest works of Matti Kassila, Luis Buñuel, Ettore Scola, and Joel & Ethan Coen. Ingmar Bergman’s centenary is honoured by an ensemble of films, and Sami van Ingen has handpicked a selection of experimental films, which he also introduces to the audience. The German critic Olaf Möller’s Masterclasses keep getting more and more popular; this time he will focus on films about football in honour of the 2018 FIFA World Cup.

The whole programme including Cannes winner Happy as Lazzarro and other fascinating, award winning and talked about new films from all around the world, highly appraised music documentaries and other rarities are released online on June 1st: https://msfilmfestival.fi/en/