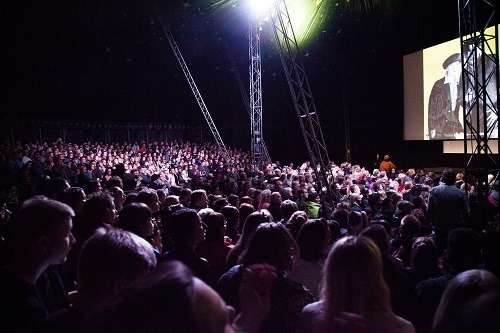 Jiri Menzel, one of the best-known filmmakers of “Czechoslovakia’s miracle of cinema” charmed the festival audience with his sense of humor and anecdotes about filmmaking behind Europe’s Iron Curtain. Academy Award winner Fernando Trueba came to represent the voice of Spain’s post Franco generation at this year’s festival, bringing his 35-year-old director son Jonas Trueba along with him.

Among the festival’s international guests were also Scotland’s Bill Forsyth, who retired from filmmaking at the age of 50, Iceland’s Dagur Kari whose work represents the Scandinavian school of black humor, the Italian documentary filmmaker Gianfranco Rosi whose Fire at Sea won the Golden Bear at the Berlin film festival, as well as Britain’s David Barr who came to the festival with his debut feature The Ones Below and Sweden’s Malin Buska, the titular star of Mika Kaurismäki’s The Girl King.

The Midnight Sun Film Festival’s matinee tradition continued this year with two matinees. Mika Kaurismäki, Anssi Tikanmäki and Neil Brand hosted Wednesday’s film music matinee, while on Saturday professors Esa Turunen and Timo Vesala discussed science and cinema along with researchers Sini Merikallio and Aino-Kaisa Koistinen. In keeping with the themes of the matinees, the festival screened a multifaceted selection of science fiction films, as well as films featuring some of cinema’s most beloved musical scores.

As in past editions of the festival, the special screenings at the Big Tent again attracted the largest audiences. Singer Ismo Alanko whipped the audience of the karaoke screening of The Saimaa Gesture to a fever pitch, while the sing-along version of Abba – The Movie was a perfect fit for a summer Saturday evening. The karaoke screening of the hugely popular Ricky Rapper at the Small Tent was also sold out.

Iiro Rantala’s reinterpretation of the score of Aki Kaurismäki’s Juha was specially commissioned for the festival and attracted a full house at the Big Tent. The magnificent silent films accompanied by Neil Brand and The Dodge Brothers were similar hits during this year’s festival.

Two of the festival’s Finnish guests, Laura Birn and Tommi Korpela, came to the festival to present their brand new international productions: Birn stars in the British thriller The Ones Below, while Korpela makes a powerful impression portraying a sea captain in the German film Deadweight. Finnish veteran actors Pirkka-Pekka Petelius and Kirsti Wallasvaara also received ferocious accolades at the festival.