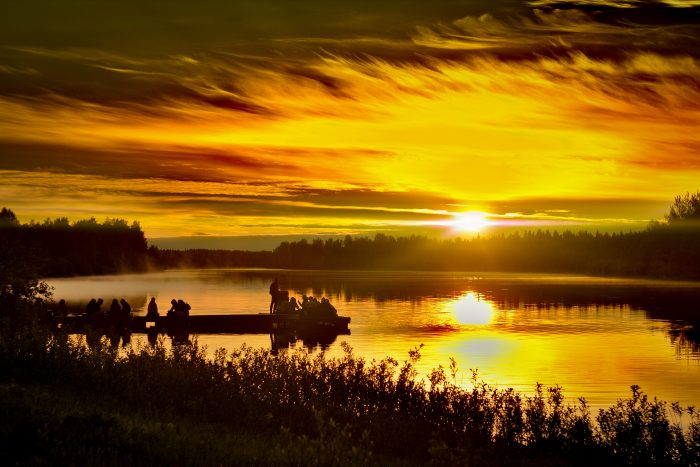 Year after year, the Midnight Sun Film Festival gathers the movie loving audience to enjoy the bright nights and the dark magic of screening venues. ”A uniquely warm spirit between people and a wonderful atmosphere was transmitted once again not only to our visitors but to our international filmmaker guests as well”, says the festival’s artistic director Timo Malmi. The Midnight Sun Film Festival will be organized for the 35th time next summer and the planning has already started. ”We will be organizing more of the eagerly awaited re-runs already during the festival so everyone will have the opportunity to see the most anticipated films”, says Malmi.

The eagerly awaited domestic filmmaker guests were actor Hannu-Pekka Björkman who presented to the audience films Aurora and The Human Part, director Dome Karukoski who guided the audience to the world of Tolkien and J-P Valkeapää who’s movie Dogs Don’t Wear Pants had its sold-out premiere in the Big Tent on Friday.

At the Finnish premiere, there were also the new film of festival’s founding father Anssi Mänttäri, young Arttu Haglund’s indie production Gone and Mikko Mattila’s documentary Mystinen metsätyömies. The magnificent actress and singer Maria Ylipää was the lead singer of the ecstatic karaoke screenings together with Olavi Uusivirta, Iida Simes and Aino Torttila. In the Carte Blanche series, the internationally distinguished documentarist Pirjo Honkasalo introduced her favorite films to the audience.

Arctic Exchange school screenings and a selection of short films at the new Cinema Kitinen opened the festival on Wednesday. Mika Taanila’s Master Class offered an introduction to the world of underground film in New York in 1960s whereas Sonora Broka, the artistic director of the Riga International Film Festival, led the audience to the brilliant cult film specialities by the theme “Baltia 101”. In his master class Kent Jones introduced the Kazakh film Revenge, which was set in the time of the fall of the Soviet Union, as well as Senegalese virtuoso Djibril Diop Mambéty’s Touki Bouki. Both films are part of the World Cinema Foundation preservation and restoration project, in which Jones is working on. The unique atmosphere of the Big Tent was at its peak on Friday and Saturday at the silent movie concerts, which were accompanied by the pianist Stephen Horne and the drummer Martin Pyne. The traditional Sodankylä Prize was awarded to film critic and journalist Hannu Björkbacka.

Pics from the festival are available at the festival’s photo gallery. Pictures are free to publish in condition that the name of the festival and photographer is mentioned.