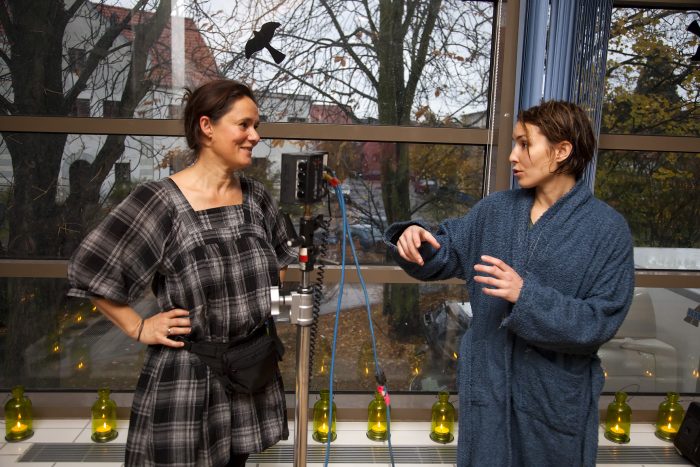 In addition to Pernille August, one of Sweden’s brightest star actors/directors, and French auteur Arnaud Desplechin, the 34th Midnight Sun Film Festival in Sodankylä (12–16 June 2019) is proud to welcome a distinguished group of others guests, too. They include Fernando Meirelles, one of Brazil’s most esteemed contemporary directors; Mohsen Makhmalbaf, Marziyeh Meshkini and Shahab Hosseini, cinema greats from Iran; and Kent Jones, filmmaker, critic and festival director. To represent a younger generation of filmmakers, we introduce Johann Lurf, top name of new experimental cinema, plus Nora Fingscheidt and Mark Jenkin, both distinguished at Berlinale. Our internationally merited documentarian Pirjo Honkasalo will present her favourite films in the ’Carte blanche’ series. Information about our other Finnish guests will follow later.

Arnaud Desplechin (born 1960) is one the rare auteurs i.e. ”true filmmakers” of contemporary French cinema. His works uphold the spirit of French new wave and have been presented in the esteemed competition for the Palme d’Or at Cannes almost without exception, such as up and coming Oh Mercy (2019), the director’s crime thriller set in Roubaix, his native city in northern France. Also screened in Sodankylä is My Sex Life… or How I Got Into an Argument (1996), ”The Mother and the Whore of the nineties”, a poetically funny love story between Parisian intellectuals. Tragicomic melodrama Kings and Queen (2003) stars a tough trio: Emmanuelle Devos, Catherine Deneuve and Mathieu Amalric. The same group of actors charm in A Christmas Tale (2008) and Amalric also in the bittersweet love story My Golden Days (2015).

Swedish star actor Pernilla August (born 1958) combines playfulness, courage, wisdom and compassion in her art. Her works communicate rare professionalism, taking us to depths but in a way that seems airy and effortless. In recent years, August has gained more and more merit also as a director. Last summer in Sodankylä we screened the Bergman-influenced short film Scener ur natten (2018) with Finnish actor Ville Virtanen appearing alongside the director. In honour of August’s visit, we will continue our Bergman 100 series with The Best Intentions (1992), a story of Bergman’s parents that brought young August the award for best female actor at Cannes. August made her breakthrough performance in Björn Runge’s hearty relationship mosaic Daybreak (2003), the whole acting ensemble of which was awarded at Berlinale. August’s directorial work will be seen in Sodankylä through Beyond (2003), a film that earned Outi Mäenpää a Guldbagge award in Sweden, and A Serious Game (2016) which was the last film for late actor Michael Nyqvist.

Fernando Meirelles (born 1955) is one of Brazil’s most esteemed and successful contemporary directors. Meirelles’ debut film Maids (2001) is a satire of housemaids, and the epic City of God (2002) brought him to the global limelight. Set in the favelas of Rio de Janeiro, the film charmed audiences all around and earned four well-deserved Oscar nominations, for example for Best Director. Meirelles has also made meritorious adaptations of works by masters of modern literature. His political thriller The Constant Gardener (2005) brought an Oscar for Rachel Weisz in the leading role. Meirelles’ more recent films include the celebrity-packed 360 (2011) and The Pope, a film about the relations of two Catholic priests that is currently in production.

The career of director, writer and Makhmalbaf Film House founder Mohsen Makhmalbaf spans over more than 30 films. They include the funny and documentary Salaam Cinema (1995), a key film in new Iranian cinema, A Moment of Innocence (1996), a depiction of the director’s jail sentence, fascinating in its play on the boundaries of fact and fiction, and Gabbeh (1996), a beautiful nomad story. Made in Afghanistan, Kandahar (2001) is one of the most famous depictions of the horrors in the country, and The President (2014) made in Georgia continues the analysis of social dimensions with its account of dictatorship. As it happens, Makhmalbaf and his filmography have been banned in Iran, and the director lives in exile in Western Europe with his family. The whole big Makhmalbaf family are filmmakers, and daughter Samira Makhmalbaf was a guest in Sodankylä already in 2009, having reached international fame at a sensationally young age.

This year our list of guests includes also Mohsen Makhmalbaf’s wife Marziyeh Meshkini (born 1969). The films we see from her reflect a deep consciousness about the status of women and children in the Middle East. Set in the island of Kish in the Persian Gulf, The Day I Become a Woman (2000) is an extremely entertaining episode film that does not shun absurd humour or a touch of the avant-garde. The film tells the metaphorical stories of three Iranian women of different ages from childhood to old age. Venice award winner Stray Dogs (2004) is a touching survival story of two children after their mother and Taleban father are thrown in jail.

Kent Jones (born 1960) is a filmmaker, critic and director of the most esteemed film festival in New York. Jones comes to Sodankylä with his first feature film Diane (2018), which is an exceptionally successful portrayal of an aged woman. Jones shares some work history with legendary director Martin Scorsese, and he gets to present the acclaimed filmmaker documentary Hitchcock/Truffaut (2015) to the Sodankylä audience. Among Jones’ merits is also his work for the World Cinema Project that restores and distributes rare or lost cinema masterpieces. Recently WCP has been working on Finnish director Mikko Niskanen’s Eight Fatal Shots, which will receive its long-awaited world premiere as a full-length film restoration in Sodankylä in summer 2020.

Actor Shahab Hosseini (born 1974) fortifies the strong input of Iranian cinema at the festival. Like Pernilla August, also Hosseini has been awarded as best actor both at Cannes and Berlinale. His role as a hot-tempered husband in the praised A Separation (2011) brought him the award in Berlin and the part as an actor and husband in The Salesman (2011) did the same in Cannes. Both films were directed by Asghar Farhadi whose breakthrough picture About Elly (2009) made Hosseini known around the world. Hosseini was a star in his home country even before that, particularly due to the film Superstar (2009). Since then he has also spent some time behind the camera and directed the film Resident of Middle Floor (2014).

Representing a younger generation of filmmakers at the festival is German Nora Fingscheidt (born 1982) who will introduce us her first feature film System Crasher. Awarded at Berlinale, the film is a startling depiction of an uncontrollably aggressive 9-year-old girl for whom child protective services are unable to find a permanent foster home.

Midnight Sun Film Festival is also proud to present two top names of new experimental cinema, Vienna cinephile Johann Lurf (born 1982) and Mark Jenkin (born 1976) from Great Britain. Lurf’s ★ (which we will screen a 2019 update) is a compilation film consisting of film scenes in which starry night skies have been captured. This masterpiece has been charming cinema audiences all over and described as ”the most romantic film of all time”. We will also see Lurf’s magical musical short film Twelve Tales Told, put together from the title clips of Hollywood studios.

Jenkin has made five feature-length films and dozens of short documentary and experimental pieces, such as the fresh David Bowie is Dead (2018). Jenkin lives and works in his native region in Cornwall, and the director’s own experiences as well as the threatened way of life in the Celtic Cornwall suffering from rural exodus are all reflected in his work. The hypnotic Bait (2009) is a depiction of a brotherly feud that gained attention at Berlinale with its inventive revival of the best traditions of British social realism.

The curator of our ’Carte blanche’ series this year is Finnish director Pirjo Honkasalo (born 1947) who is known for numerous films that have also been praised outside of Finland. More information about other Finnish and international guests will follow in May, when also the full festival programme is announced.