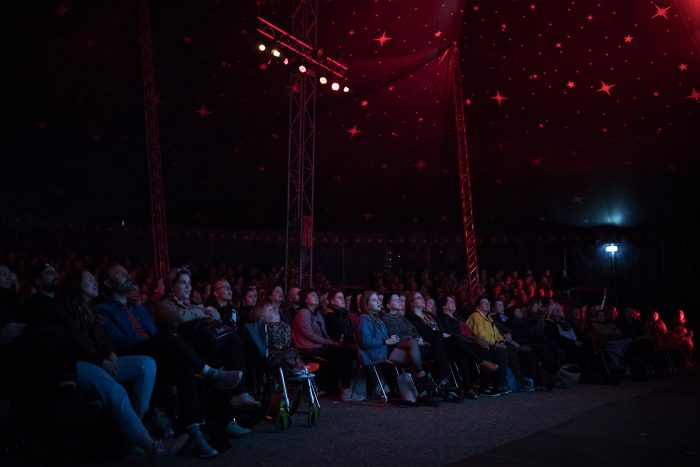 Thursday started with the morning discussion with Arnaud Desplechin. The director told about his childhood and how he grew up in a small impoverished town called Roubaix. After the discussion, the director’s newest film Oh Mercy! (2019) got its Finland’s premier.

Afternoon was the moment for a great celebration, as the Sodankylä prize was granted to the film critic Hannu Björkbacka and the new Cinema Kitinen was opened by the circus artist Nätsi Rosvall.

Director and documentarist Pirjo Honkasalo’s Carte Blanche series continued with Satyajit Ray’s Pather Panchal. “This film is partly responsible for my decision to start making documents after fiction”, Honkasalo revealed. Her documentary Atman (1997) is set in India. “In India there is the idea that a person should live all the human forms of experience during his or her life, which is reflected from Ray’s world. In some way, I wanted to paint a film-like landscape, which you can access in different ways.”

Director and film researcher Kent Jones’ carte blanche series started with the last film of Alfred Hitchcock’s English period, The Lady Vanishes (1938). “When we were young cinephiles, we used to argue what is Hitchcock’s best creative period. Now I see different eras from another viewpoint and I can see the greatness in all his works”, he told. Jones also described the film to be one of the most enjoyable of Hitchcock’s works. Anyhow it is not compromising on themes such as mysteriousness, setting the suspense and troubling personal fears, which are typical for the director.

On Thursday evening there was the first karaoke screening of this year’s festival. The Big Tent was full of singing as Baz Luhrman’s glamorous music spectacle Moulin Rouge! was screened and led by the singers Maria Ylipää and Olavi Uusivirta. After the karaoke screening it was time to watch stars as Johann Lurf’s compilation film ★ was screened in the Big Tent. Lurf, attending the screening, remarked that the tent with star figures near the ceiling provided a completely different 360° experience.