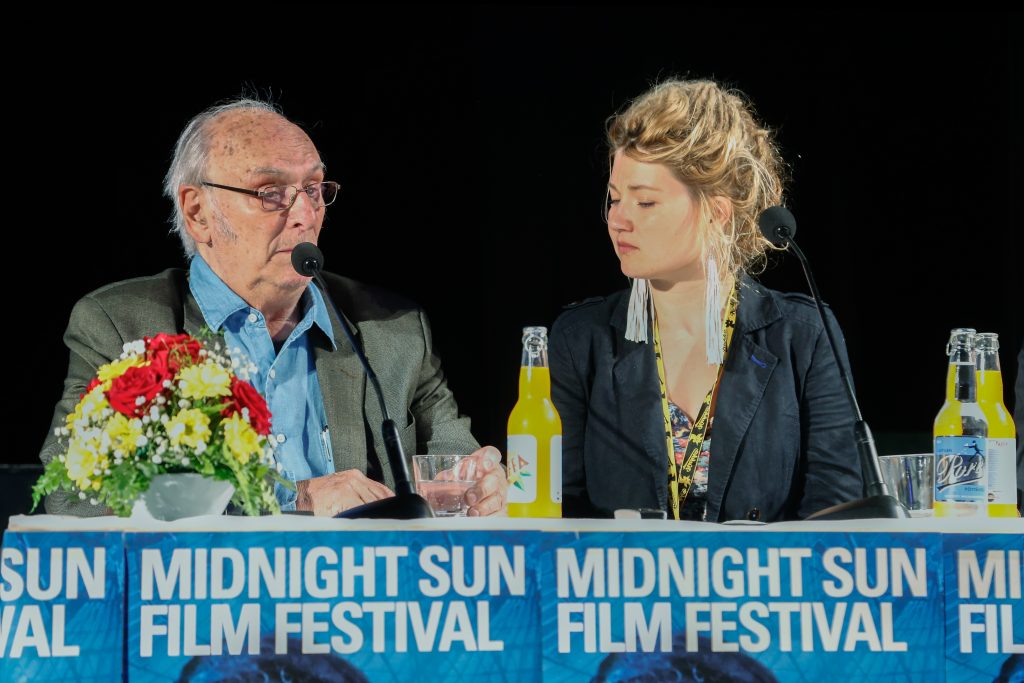 Saturday’s morning discussion at the Kitisenranta School featured Spanish director Carlos Saura who talked about his long and varied career with interviewer Timo Malmi. Saura often deals with themes of memory and past and said that his father used to entertain the children with a memory board where he collected news clippings, drawings and pictures. The family used to look at the board together and reminisce about the past.

Saura spent his youth moving from city to city following his father’s job. The Spanish Civil War broke out when Saura was four years old. It was a huge upheaval that changed the whole era and Saura thinks that the horrors of war affect all his films, consciously or unconsciously. Like many of his contemporaries, Saura wanted to resist war and militarism with his films.

Saura mentioned that his economic way of making films also developed due to the war. He tries to avoid unnecessary takes and experimentation during the shooting. He prefers to rehearse with the actors beforehand and starts shooting only after everything feels clear. He also prefers to shoot in chronological order to see how the actors develop in their roles.

Saura also reminisced on his father-in-law Charlie Chaplin as well as on his friendship with fellow director Luis Bunuel. Bunuel had said to Saura that after Bunuel’s death he is the only director who could continue the work Bunuel had started. Saura was married to actress Geraldine Chaplin, for whom father Charles was writing his final script. The film was never made but Geraldine and Charlie read parts of the script playing different characters to Saura, who did not know English.

Saura is an enthusiast of many different artforms and filmmaking combines many of his loves, such as storytelling, set design, music, dance and photography. Saura especially considers photography to be the red line running through his diverse career. Recently Saura went through the negatives of his photographs from the 1950’s in preparation for a book. He was surprised by how much Spain has changed during the years. In some photos Spain’s small villages looked almost medieval to modern eyes.

Saura said that he believes in fate and the the influence of luck on life. He advised the audience to sometimes let things roll on their own weight. He considers it hard to control his own existence and likes filmmaking because he can control the end result. For Saura, reality does not consist of only that which is visible – the memories and future possibilities we carry with us are also part of everything. He has also tried to convey this philosophy in his films.

At the end of the interview Saura warned the audience that memories have a life of their own. For example, the photographs of our childhood shape the way we thinks of those times. Because our conception of the past changes constantly, memories can not be trusted.

When asked the traditional final question about his desert island film, Saura explained that everyone carries with them their own film which they see when they close their eyes. He thinks that watching that film is a good practice for anyone – even if they are not stranded on a desert island.